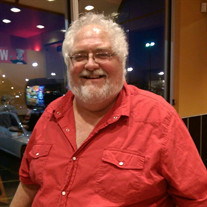 Alain E. Pennock, age 61, of rural Marion, IL, passed away peacefully at 9:22 p.m. on Monday, August 14, 2017, at his home. He was born on Thursday, June 21, 1956, in Moberly, MO the son of Robert LeRoy Pennock, Sr. and Bertha Jeanne (LaMarc) Pennock. Alain attended school in Marion and was a graduate of Marion High School in 1975. He continued on with his education by attending at John A. Logan College of Carterville, IL. He was united in marriage to Kim Alycia Springer on Friday, November 19, 1976, in the Parish Park Baptist Church of Marion and together they shared over 31 years of marriage until her death on Wednesday, December 19, 2007. Alain’s working career was with FedEx of Marion for 32 years until his retirement. He enjoyed and was proud of his job, always looking forward to going to work and even had on his vehicle license plate “1 FDXMN.” For the past several years, Alain had been attending and actively involved at The View Church of Carbondale, IL. In his spare time he enjoyed spending time with his family, especially his grandchildren. He looked forward to the many times they would be together and the many memories that have been created will now be cherished by those he leaves behind. He is survived by two sons and daughter-in-law, Caleb Joshua Marc Pennock and his wife Shawna of Carterville, IL and Elijah Matthias Jedidiah Pennock of Herrin, IL; two grandsons, Leonardo Antilles Pennock and Michelangelo Xavier Pennock both of Carterville and soon to be granddaughter, to be born on Thursday, August 24, 2017, Ginevra Elizabeth Rose Pennock of Herrin; brother, Robert L. Pennock, Jr. of Marion; nephew, Joey Pennock of Fort Lauderdale, FL; niece, Angie Pennock of Columbus, OH; mother-in-law, Marilyn Springer of Marion; sister-in-law, Karen Springer of Marion; nephew, US Navy Chaplain Tim Springer and his wife Kathy of CA; great nephews, Thaddaeus James, Ethan Theophilus and Seth Gabriel Springer all of CA; great niece, Tyndall Aslan Springer of CA, other extended family and many friends. He was preceded in death by his parents and wife. Arrangements for Alain E. Pennock have been entrusted to Wilson-McReynolds Funeral Home, 900 N. Court St., Marion. The visitation will be from 11:00 a.m. until 1:00 p.m. on Tuesday, August 22, 2017, at the funeral home. Following the time of visitation the funeral service will be at 1:00 p.m. with Pastor Jacob Swain presiding. Interment will follow next to his wife in Rose Hill Cemetery of Marion. For those who prefer, memorial contributions may be made to, “The View Church Garden Fund” and mailed in care of Wilson-McReynolds Funeral Home, 900 N. Court Street, Marion, IL 62959. Memorial envelopes will be available at the funeral home. For additional information please call the funeral home at 618-993-2131.

The family of Alain Eugene Pennock created this Life Tributes page to make it easy to share your memories.

Send flowers to the Pennock family.