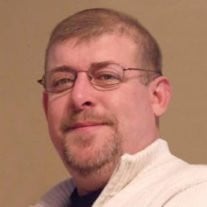 Allen R. Kobler, age 43, of Marion, IL, passed away surrounded by his family at 9:04 p.m., on Thursday, August 15, 2013, at the home of his mother, Paula. He was born in Marion, IL on Friday, November 7, 1969, the son of Richard Lee and Paula J. (Frick) Kobler. Allen attended school in Marion and was a graduate of Marion High School in 1987. Early in his working career he worked for several of the areas automobile dealerships as a salesman. For the past 15 years, he has worked for American Coal Company of Galatia, IL starting in production, and then as a Mine Examiner. He was known to them by the name of “Peaches”. Allen has been a lifetime member of Zion United Church of Christ of Marion, IL. He also was a member of the Marion Elks Club B.P.O.E. # 800 and a member of the coal mine fire brigade. He loved being outdoors taking care of his pool, mowing the yard, washing his vehicles or cutting firewood. Allen loved the many times when his friends and neighbors would gather at his home around the pool, barbequing, spending time together and just relaxing. He was known as being “An Awesome Uncle” by his nieces. Allen would often pick them up in the mornings before school in his white 1991 corvette for breakfast and taking them on to school. The many memories that have been created will now be cherished by those he leaves behind. He is survived by his mother, Paula J. Kobler of Marion, IL; sister and brother-in-law, Jeanine and Brad Ragain of Marion, IL; girl friend, Lori Ledbetter of Marion, IL; two nieces, Hallie and Taylor Ragain both of Marion, IL; four uncles and aunts, Gary and Kathy Kobler, Bill and Cindy Kobler and Keith and Margaret Frick all of Marion, IL and Steve and Donna Frick of Russellville, AR, other extended family and many friends. He was preceded in death by his grandparents, father and aunt, Jane Frick. Arrangements for Allen R. Kobler were entrusted to Wilson-McReynolds Funeral Home, 900 N. Court St., Marion, IL. The funeral service was at 1:00 p.m. on Monday, August 19, 2013, at Zion United Church of Christ, located at 930 West Cherry Street, Marion, IL with Rev. John Holst presiding. Comments of memory were presented by Allen’s brother-in-law, Brad Ragain and uncle, Steve Frick. Also during the service Marion Elks Club member, Randy Jones presented “The Elk’s Prayer”. The prelude and postlude musical selections were presented by organist, Sharon Wilson and pianist, Doris Anderson. At the beginning of the service, during the seating of the family, the special recorded vocal musical selection “I Believe” by Diamond Rio was presented. The “Tolling of the Bell” 43 times, was done by Randy Jones. Congregational hymns presented were “Precious Lord Take My Hand” and “I Was There to Hear Your Borning Cry” accompanied by organist, Sharon Wilson and pianist, Doris Anderson. The service concluded with the recorded musical selection “Somewhere Over the Rainbow” by Israel Kamakawiwo’ole as the casket was taken out of the church. Interment followed in Maplewood Cemetery of Marion, IL. At the cemetery a special recorded musical selection “Go Rest High on That Mountain” by Vince Gill was presented to close the service. Pallbearers were Aaron Christ, John Bailey, Mitch Smoot, Jeremy Larson, Mike Smoot and P.J. McBride. After the service the family and friends gathered back at Zion United Church of Christ for a meal and continued time of fellowship and support. The time of visitation for family and friends was on Sunday, August 18th, from 4:00 p.m. until 8:00 p.m. at the funeral home and resumed at the church at 11:00 a.m. on Monday until the time of the service. During the time of visitation a “Reflection of Life” DVD Memorial Tribute featuring special people, places and events of Allen’s life was presented to the family and friends. For those who preferred, memorial contributions were made to “Zion United Church of Christ Memorial Fund” or “Hospice of Southern Illinois”. Memorial contribution envelopes were available at the funeral home and the church or were mailed in care of Wilson-McReynolds Funeral Home, P.O. Box 370, Marion, IL 62959. For additional information please contact the funeral home by calling 618-993-2131.

The family of Allen Richard Kobler created this Life Tributes page to make it easy to share your memories.

Send flowers to the Kobler family.