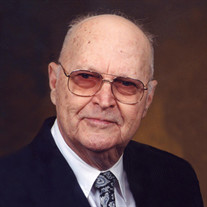 Amos L. “A.L." Boyt, age 92, of Marion, IL, passed away peacefully with his family by his side at 10:08 p.m. on Thursday, December 31, 2015, at his home. He was born on Thursday, June 28, 1923, in Marion, IL the son of Arlie and Maud (Peltser) Boyt. A.L. attended school in Marion. He later received his Bachelor Degree in Business Management from Southern Illinois University of Edwardsville. He was united in marriage to Ruth Juanita Watkins on Monday, November 10, 1941, in Marion and together they shared over 71 years of marriage until her death on Friday, January 25, 2013. His working career was with the railroad beginning with the C & E I which became the Missouri Pacific and later the Union Pacific as a trainmaster. After a career of 37 1/ 2 years and working in several states he retired and moved back to Marion, IL. A.L. was a member of the Second Baptist Church of Marion. He also was a member of Fellowship Masonic Lodge No. 89 AF & AM of Marion. He was a certified telegrapher and recently had rebuilt one of his telegraph machines that he gave to his grandson. In his spare time he enjoyed traveling and camping with his family in their Airstream Trailer. In his earlier years he also enjoyed hunting and fishing. A.L. was always interested in the activities of his son and grandchildren and was proud of their many accomplishments and enjoyed their times together. Those memories will now be cherished by those he leaves behind. He is survived by his son and daughter-in-law, Paul Ray and Beverly (Hock) Boyt of Marion; grandson and his wife, Benjamin Paul and Theresa (Adams) Boyt of Marion; granddaughter, Mary Anne (Boyt) Mohr and husband Austin of Lincoln, NE; great granddaughter, Rebekah Marie Boyt and great grandson, Michael Paul Boyt both of Marion; brother-in-law, Lynn Watkins of Marion; four sisters-in-law, Naomi Turner of Metropolis, IL, Margie Gore and husband Bob of Kansas City, MO, Helen Holloman and husband Ed of Phoenix, AZ and Melanie Young Sutton of Orange Park, FL, several nieces and nephews, other extended family and many friends. He was preceded in death by his parents, wife; sister, Joan Boyt and brother, Andy Boyt. Arrangements for Amos L. “A.L.” Boyt were entrusted to Wilson-McReynolds Funeral Home, 900 N. Court St., Marion, IL. The visitation was from 1:00 p.m. until 2:00 p.m. on Saturday, January 2, 2016, at the funeral home. Following the time of visitation the funeral service was at 2:00 p.m. with Dr. Bob Wagner presiding. The prelude and postlude musical selections were presented by pianist, Lori Creamer. Special instrumental musical selections presented during the service were; “What A Friend We Have In Jesus” and “I’ve Got A Mansion Over the Hilltop” both by pianist, Lori Creamer. Interment followed next to his wife in Maplewood Cemetery of Marion, IL. Pallbearers were Jerald Kobler, Jerry Odum, Terry Odum, Gary Odum, Steve Cole and Larry Williams. Following the committal service at the cemetery the family and friends gathered at Second Baptist Church for a meal and continued time of fellowship and support. For those who preferred, memorial contributions were made to the “Second Baptist Church Food Pantry” and mailed in care of Wilson-McReynolds Funeral Home, P.O. Box 370, Marion, IL 62959. Memorial envelopes were available at the funeral home. For additional information please contact the funeral home by calling 618-993-2131.

The family of Amos L. "A.L." Boyt created this Life Tributes page to make it easy to share your memories.