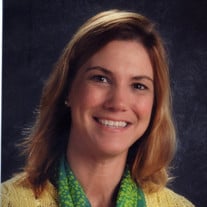 Amy L. (Smith) Blaise, age 43, of Marion, IL, went home to be with her Lord and Savior, at 11:30 p.m. on Friday, January 30, 2015, at her home. She was born on Monday, December 27, 1971, in Mt. Vernon, IL the daughter of Gordon and Doris Sue (Tanner) Smith. Amy attended school in Crab Orchard, IL and was a graduate of Crab Orchard High School in 1990. She went on and attended John A. Logan College of Carterville, IL. After leaving Southern Illinois for several years, she returned and enrolled at Southern Illinois University of Carbondale, IL, where she remained on the Dean’s list all through her education, and received her Bachelor’s degree in Special Education in May of 2013. After graduation she interviewed for a position at Jonesboro Elementary School. Shortly after the interview she was hired and began her teaching career in special education, grades 3rd thru 5th. She loved her students as much as her own and helped them academically, physically and emotionally as much as she could. Amy loved all of her fellow staff members and enjoyed the time they spent together. She also worked at Family Video in Marion, IL. She attended Antioch Church in Stonefort, IL where her father was the pastor. In her spare time she enjoyed playing the piano and was very talented in music. She also enjoyed sports and was an avid fan of hockey, especially of the St. Louis Blues. Her three boys were the center of her life and she was interested in all of their many activities. She was proud of their achievements and was always encouraging them toward the future. She also was always looking for opportunities to be a blessing to others. The smiles on her face and the many memories that have been created will now be cherished by those she leaves behind. She is survived by her father and mother, Rev. Gordon and Sue Smith of rural Creal Springs, IL; three sons, Alex D. Blaise, Nicholas G. Blaise and George A. Blaise all of Marion, IL; sister and brother-in-law, Angela and Bo Powell of Shirley, IL, located near Bloomington; niece, Kristin N. Powell; two nephews, Benjamin R. Powell and Jacob L. Powell, a host of aunts and uncles, other extended family and many friends. Arrangements for Amy L. (Smith) Blaise were entrusted to Wilson-McReynolds Funeral Home, 900 N. Court St., Marion, IL. The funeral service was at 11:00 a.m. on Saturday, February 7, 2015, at Aldersgate United Methodist Church, located at 1201 N. Fair St., Marion, IL with Rev. Dr. Tim Ozment, Rev. Ivan Ryan and Steven Wiseman presiding. Comments of memory were presented by Zach Young. The prelude and postlude musical selections were presented by pianist, Judy Hopkins and organist, Sharon Disney who also presented the instrumental musical selection “It Is Well With My Soul” during the service. Special vocal musical selection presented was “Here Comes the Storm” by Lisa Newmann who accompanied herself on the piano. Interment followed in Bolton-Trammell Cemetery near Stonefort, IL. At the graveside comments, reading of scriptures and committal words were presented by Rev. Dr. Tim Ozment and Rev. John Horner. Following the committal service at the cemetery the family and friends gathered at Arnold View Free Will Baptist Church for a meal and continued time of fellowship and support. Pallbearers were Alex Blaise, Nic Blaise, Kyle Hughes, Connor Chamness, Jaden Winsor and Zach Young. The time of the visitation was from 3:00 p.m. to 8:00 p.m. on Friday, February 6th at Aldersgate United Methodist Church. Visitation resumed again on Saturday morning at 9:00 a.m. until the time of the service at the church. During the time of visitation a “Reflection of Life” DVD Memorial Tribute featuring special people, places and events of Amy’s life was presented to the family and friends. For those who preferred, memorial contributions were made to either “Cardinal Glennon Children’s Hospital” or “Jonesboro Elementary School Special Education Fund” and mailed in care of Wilson-McReynolds Funeral Home, P.O. Box 370, Marion, IL 62959. Memorial envelopes were available at the church and the funeral home. For additional information please contact the funeral home by calling 618-993-2131.

The family of Amy (Smith) Blaise created this Life Tributes page to make it easy to share your memories.

Send flowers to the Blaise family.