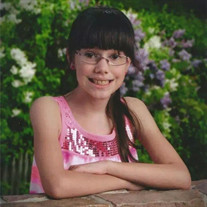 Anastasia M. Vandiver, age 11, of Marion, IL passed away suddenly with her family by her side at 5:49 p.m. on Sunday, August 17, 2014, in St. Louis Children’s Hospital of St. Louis, MO. She was born on Thursday, May 15, 2003, in Carbondale, IL the daughter of Eric Scott and Amy Renee (Rhine) Vandiver. Her name Anastasia, means “Resurrection of Spring” a fitting name for being born in the springtime. Her parents had chosen this name long before she was born. Anastasia loved school and had just begun the new school year last Tuesday on August 12th at Marion’s Washington School in Mr. Travis Vickery’s 5th Grade. She enjoyed reading, going to the parks and zoo, drawing, blowing bubbles, playing with her Monster Highs Dolls, Barbie’s, Ever After Dolls, playing video games, watching movies at home with her family and going out to the movies. She did not know a stranger and accepted everyone with an open heart and arms. She was a giving and very caring young lady and wanted to help anyone she saw that had a need. Though she was only 11, she had made a difference in this world and in the lives of those that knew her. She is survived by her father and mother, Eric S. and Amy R. Vandiver of Marion, IL; sister, Natasha Nicole Vandiver of Marion, IL; maternal grandfather, Phillip Rhine of Eldorado, IL; maternal grandmother and grandfather, Renee and Michael Lovellette of Harrisburg, IL; paternal grandmother and grandfather, Henny Vandiver-Baisden and Curtiss Baisden of Dexter, MO; maternal great grandmother and great grandfather, Wanda and Jim Potts of Harrisburg, IL and maternal great grandmother, Judy Lovellette of Eldorado, IL; two aunts, Hannah Rhine of Harrisburg, IL and Stephanie Luton and her husband, Ryan of Valier, IL; two uncles, Tom Vandiver and his wife, Vicky of Wasco, IL and Christopher Lovellette and his wife, Ellie of Wilsonville, IL, a host of cousins, other extended family and many friends. She was preceded in death by her paternal grandfather, Tom Vandiver. Arrangements for Anastasia Marie Vandiver were entrusted to the Wilson-McReynolds Funeral Home, 900 N. Court Street, of Marion, IL. The time of visitation was from 4:00 p.m. until 8:00 p.m. on Thursday, August 21st at the funeral home. During the time of visitation a “Reflection of Life” DVD Memorial Tribute featuring special people, places and events of Anastasia’s life was presented to the family and friends. The funeral service was at 11:00 a.m. on Friday, August 22, 2014, at Wilson-McReynolds Funeral Home with Rev. Michael Nave presiding. The prelude and postlude musical selections were presented by pianist, Lori Creamer. Special vocal musical selections presented during the service were “Somewhere Over the Rainbow”, “You Are My Sunshine” and “Amazing Grace” all presented by Lori Creamer who accompanied herself on the piano. Also presented was a special recorded vocal musical selection presented to close the service was “In the Arms of an Angel” by Sarah McLachlan. Interment followed in Rose Hill Cemetery of Marion, IL. Pallbearers were Eric Vandiver, Tom Vandiver, Christopher Lovellette and Eddie Brooks. Following the committal service at the cemetery the family and friends gathered at Cornerstone Community Church in Marion, for a meal and continued time of fellowship and support. For those who preferred, memorial contributions were made to Anastasia’s family, “Eric and Amy Vandiver”. Memorial contribution envelopes were available at the funeral home or were mailed in care of Wilson-McReynolds Funeral Home, P.O. Box 370, Marion, IL, 62959. For additional information please contact the funeral home by calling 618-993-2131.

The family of Anastasia Marie Vandiver created this Life Tributes page to make it easy to share your memories.

Send flowers to the Vandiver family.