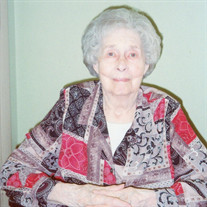 Anna Elizabeth “Beth” Doerr, age 98, of Marion, IL, passed away peacefully at 10:54 a.m. on Monday, September 18, 2017, in Shawnee Christian Village of Herrin, IL. She was born on Friday, April 18, 1919, in Marion, IL, the daughter of Marion and Ethel (Richey) Crosson. Beth grew up and attended grade school in Crab Orchard, IL and graduated from Marion High School Class of 1938. In her early years she was a member of Spring Grove United Methodist Church east of Crab Orchard. After moving to Benton, IL, she joined the West City Baptist Church in West City, IL, where she loved her church and served as the church organist, pianist, and women’s Sunday school teacher for many years. She was united in marriage to Merwin Lee “Jack” Doerr on March 31, 1945, in Carrier Mills, IL and together they shared fifty-two years of marriage until his death on Friday, March 7, 1997. Shortly after Jack and Beth were married Jack left his job at Kroger’s in Marion and joined Beth in operating the Gem Café in Carrier Mills. Soon after that, they operated a grocery in Marion and then operated a restaurant in Crab Orchard until 1949. For twenty-six years they owned and operated Doerr’s Market on West Main Street in Benton. After a short retirement Beth and Jack opened Doerr’s Market in Christopher and retired in May of 1981. Jack was a butcher for thirty years and developed a good business around their meat department. Following their retirement Beth and Jack moved back to Marion in 1994. Beth and Jack were accomplished musicians with Beth playing the accordion, organ, and piano and Jack playing the violin and the organ and were in demand in Benton to play for weddings and funerals. She is survived by her brother and sister-in-law, Frank and Loretta Crosson of Marion and a host of nieces and nephews She was preceded in death by her parents, husband, and sister, Beulah Brown. The time of visitation for the family was from 8:15 a.m. to 9:00 a.m. on Monday, September 25, 2017, at Wilson-McReynolds Funeral Home in Marion, IL. Following the time of visitation the funeral service was at 9:00 a.m. with Rev. Joe Kozar presiding. Sister-in-law Loretta Crosson presented scripture readings and comments of memory. Comments of memory were also presented by Beth’s niece Jane Crosson and nephew Scott Crosson. Special vocal musical selections presented were “Precious Lord Take My Hand” and “What a Day That Will Be” both by Diana Kozar with Jane Crosson accompanying on the piano. Burial followed in the Spring Grove Cemetery east of Marion, IL. At the graveside the special vocal musical selection “Amazing Grace” was presented by Diana Kozar, Jane Crosson and Scott Crosson with Scott Crosson accompanying on the guitar. For additional information or to leave an online condolence please visit our website at www.wilsonmcreynolds.com or call the funeral home at 618-993-2131.

The family of Anna Elizabeth "Beth" Doerr created this Life Tributes page to make it easy to share your memories.