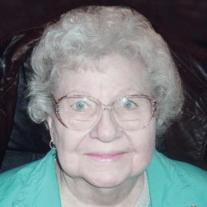 Anna Mae Robinson, age 85, of rural Carterville, IL, formerly of Marion, passed away at 11:31 a.m., on Saturday, November 26, 2011, at home. She was born on Wednesday, March 17, 1926, in Marion, IL the daughter of Guy and Josie Mae (Bearden) Bloodworth. Anna Mae was united in marriage to Fred Norman Robinson on November 29, 1945, in Marion, IL and together they shared over fifty-four years of marriage until his death on March 23, 2000. After her marriage she never worked outside of the home but always kept her life full with managing her home and seeing to the needs of her husband, children and family. She was a member of the Full Gospel Tabernacle Church of Marion, IL and was active in the church while her health allowed. Her family was a very important part of her life and she enjoyed spending time and going out to eat with them. She also looked forward to getting her hair done and visiting with all her friends she saw at the beauty shop. She is survived by her son, Gary W. Robinson and his fiancé, Karen Isbell both of Carterville, IL; son-in-law, Glenn McFarland of South Lake Tahoe, CA; four grandchildren, Tracey and Larry Trone and Tiffiney Palmer all of Marion, IL and Brian and Tim McFarland both of South Lake Tahoe, CA; four great grandchildren, Brian McFarland, Jr., Jasmine Tia McFarland, Brandon Martin and his wife, Tiffany and Steven Scott and his wife, Kristyn; brother, Don Bloodworth of Marion, IL; four sisters-in-law, Geri Bloodworth, Brenda Bloodworth and Mercedith Duffield all of Marion, IL, Katheryn Deutinger and husband, Charles of Cloves, CA; brother-in-law, Donald Robinson and his wife, Elva of Marion, IL, many nieces and nephews, other extended family and many friends. She was preceded in death by her parents, husband; daughter, Judy McFarland; three sons, Jerry Dale Robinson, Freddie Eugene “Hugi” Robinson and Billy Don Robinson and his wife, Norma Lynn Burklow; three infant sisters, Mabel, Ethel and Dolleena; four brothers, Dean Bloodworth, Guy Bloodworth, Jr. and his wife, Sharon, Eugene “Gene” Bloodworth and Horace “Peck” Bloodworth and his wife, Shirley and sister-in-law, Geneva Bloodworth. Arrangements for Anna Mae Robinson were entrusted to Wilson-McReynolds Funeral Home, 900 N. Court Street, of Marion, IL. A time of visitation for family and friends was on Wednesday, November 30th, from 5:00 p.m. until 8:00 p.m. at the funeral home. During the time of visitation a “Reflection of Life” DVD Memorial Tribute featuring special people places and events of Anna Mae’s life was presented to the family and friends. The funeral service was at 11:00 a.m. on Thursday, December 1, 2011, at Wilson-McReynolds Funeral Home with Rev. John Burnett presiding. The prelude and postlude musical selections were recorded piano selections. Special recorded vocal selections presented during the service were “One More Valley” by Jimmy Swaggart, “The Great Speckled Bird” by Jim and Jesse McReynolds and “Build My Mansion” by The Porchlight Trio. Interment followed next to her husband in Maplewood Cemetery of Marion, IL. Pallbearers were David Bloodworth, Guy Bloodworth, Brandon Martin, David O’Conner, Jeff Bloodworth and Edward Peterson. After the committal service at the cemetery the family and friends gathered at the home of Anna Mae’s son, Gary for a meal and continued time of fellowship and support. For those who preferred, memorial contributions were made to “Full Gospel Tabernacle Church Building Fund”. Memorial contribution envelopes were available at the funeral home or were mailed in care of Wilson-McReynolds Funeral Home, P.O. Box 370, Marion, IL 62959. For additional information please call the funeral home at 618-993-2131.

The family of Anna Mae Robinson created this Life Tributes page to make it easy to share your memories.

Send flowers to the Robinson family.