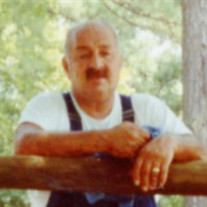 Augustine Joseph “Joe” Segretario, age 87, of Marion, IL, passed away at 10:25 p.m. on Thursday, October 19, 2017, in the Veteran’s Community Living Center of Marion. He was born in Marion, IL on Tuesday, May 13, 1930, the son of Gaetano and Salvatoria Dorothy (Viso) Segretario. He grew up and attended school in Marion and was a member of the Marion High School class of 1950. Joe answered the call of his nation by serving in the United States Army and was honorably discharged on June 2, 1953. He was a machinist for many years at Allen Industries in Herrin, IL. Joe was of the Catholic faith and in earlier years attended St. Joseph Catholic Church of Marion. Joe was united in marriage to Shirley Lou Griffith on Saturday, April 7, 1951, in Murphysboro, IL and together they shared over sixty-one years of marriage until her death on Friday, October 5, 2012. He was a former member of both the VFW Heyde-Pillow No. 1301 and the Eagles Aerie post No. 2457 of Marion. He was the original “Trader Joe” and loved trading and buying and selling cars. He always enjoyed spending time with his family and many friends, creating memories that will now be cherished by those he leaves behind. He is survived by his two daughters, Joni Emmerson of Paducah, KY and Lisa Niggeman of Marion, IL; son and daughter-in-law, Gary and Barbara Segretario of Marion, IL, fifteen grandchildren, twenty-eight great grandchildren; two great great-grandchildren; one brother, Dominick Segretario of Johnston City, IL three sisters-in-law, Marietta Chalupsky of Cedar Rapids, IA, Margaret Mocaby and husband, Paul of Marion, IL, and Lorna Zemar and husband, Jim of Shorewood, IL; brother-in-law, Eddie Joe Griffith and wife, Dee of Herrin, IL; a host of nieces and nephews; other extended family, and many friends. He was preceded in death by his parents; wife, Shirley Sergretario; son, Tony Segretario on December 5, 1982; five sisters, Rosalie Stubblefield, Frances Meneese, Bessie Viverito, Josephine Short, Elsie Rametta; infant sister, Lesaundra Rametta, and two brothers, Paul and Andy Rametta. Arrangements were entrusted to Wilson-McReynolds Funeral Home, 900 N. Court St., Marion. The visitation was from 5:00 p.m. until 8:00 p.m. on Tuesday, October 24th at the funeral home. The funeral service was at 11:00 a.m. on Wednesday, October 25, 2017, with Monsignor Ken Schafer presiding. Special vocal musical selections presented during the service were “Daddy’s Hands” by Holly Dunn, “I Can Only Imagine” by MercyMe, “Ave Maria-Schubert” by Franz Schubert and Michelle Todd, “Time to Say Goodbye” by Sarah Brightman and Andrea Bocelli, “Amazing Grace” by Elvis Presley, and “Go Rest High on That Mountain” by Vince Gill. Comments of memory were presented during the service by Joe’s granddaughter, Autumn Edwards. Interment followed next to his wife in Rose Hill Cemetery of Marion. Those serving as pallbearers were Anthony Segretario, Vincent Segretario, Eric Collins, Conrad Niggeman, Justin Emmerson, and Paul Mocaby. Military honors were accorded at the cemetery by members of Heyde-Pillow V.F.W. Post No. 1301 and American Legion Post No. 147 both of Marion and members of the United Army National Funeral Honors Burial Detail. Those participating were Art Ambros, Gene Broombaugh, Don Burgrabe, Bob Casey, Ron Ganzer, Fred Read, Bill Rice, Ernie Rinella, and Ron Russell. Following the graveside committal service family and friends gathered at Bennie’s Italian Foods for continued time of fellowship and support. For additional information call the funeral home at 618-993-2131.

The family of Augustine Joseph "Joe" Segretario created this Life Tributes page to make it easy to share your memories.

Send flowers to the Segretario family.