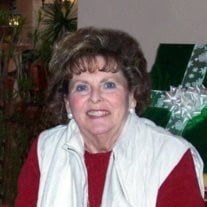 Barbara L. Davenport, age 80, of Cumming, GA, formerly of Marion, IL, passed away peacefully with her five children by her side at 3:17a.m. (Eastern Time), on Monday, November 25, 2013, in Gracemont Assisted Living Center of Cumming, GA. Barbara was born on Monday, October 2, 1933, in East St. Louis, IL, the daughter of William D. and Flora Mae (Willett) Tucker. She attended and graduated from St. Theresa’s Academy of East St. Louis, IL and later in life received her Associate Degree of Art from John A. Logan College of Carterville, IL Barbara was first united in marriage to Robert Russell Rickert on October 10, 1953. She later was united in marriage to James H. Davenport on March 17, 1989, at Green Cove Springs, FL and together they have shared the last twenty-four years of marriage. Earlier in her working career she worked as a Respiratory Therapist. She left this profession to be able to remain at home and be involved in her children’s lives and activities. Then in 1977, she began working as an Executive Secretary at John A. Logan College of Carterville, IL until she decided to retire in 1989, after her marriage to James H. Davenport. She was a member of St. Joseph Catholic Church of Marion, IL. Barbara loved to travel and had visited most every state in the country. She enjoyed music and was a pianist. She also was an artist, painting with watercolors and had many of her originals in her home and enjoyed presenting her paintings to her many friends as gifts. Barbara enjoyed writing and while working at John A. Logan College she wrote a column in one of their publications. She also loved to cook and do gardening. Her family was most important to her and she always took interest in their many activities. Barbara will be missed by all who knew and loved her and they will treasure the many memories shared. Survivors include her husband, James H. Davenport of Cumming, GA; son and daughter-in-law, Kirk and Jamie Rickert of Goreville, IL; four daughters and sons-in-law, Karen and Bruce Kiesling of Senatobia, MS, Julia (Stelling) and Jim Bland of Freeburg, IL, Lynne and Don Redden of Marion, IL and Jennifer and Kurt Heinrichs of Cumming, GA; seven grandchildren, Rachel Dunning and her husband, Troy of Goreville, IL, Cory Stelling of Freeburg, IL, Brandon Kiesling of Urbandale, IA, Brooke Merril and her husband, Kalip of Marion, IL, James Redden of North Little Rock, AR, Wesley Heinrichs and Garrett Heinrichs both of Cumming, GA; six great grandchildren, Blaine, Morgan and Kaitlynne Dunning all of Goreville, IL and Colton, Logan and Tyson Stelling all of Freeburg, IL; step son, James M. Davenport of Silverthorne, Colorado; step daughter, Ellyn Davenport of Leesburg, FL; step granddaughter, Jamie Davenport of West Palm Beach, FL; sister and brother-in-law, Diane and William Schwinn of Bunker Hill, IL; brother and sister-in-law, Kenneth W. and Leslie Tucker of Oke, OK, other extended family and many friends. She was preceded in death by her parents; son-in-law, Harry Stelling; nephew, Kenny Tucker, Jr.; first husband, Robert Russell Rickert and two twin grandchildren, Jeremy and Jason Heinrichs. Arrangements for Barbara Lee Davenport were entrusted to Wilson-McReynolds Funeral Home, 900 N. Court St., Marion, IL. The time of visitation was from 12:00 noon until 12:50 p.m. on Saturday, November 30, 2013, at St. Joseph Catholic Church located at 600 N. Russell St., Marion, IL. Following the time of visitation the funeral mass was at 1:00 p.m. with Monsignor Thomas D. Flach presiding. The prelude and postlude musical selections were presented by organist, Valerie Oestry. The special readings presented during the service were by Bob Wargel. Valerie also presented the special hymns of the mass on the organ. Interment followed in Busby Cemetery of Goreville, IL. Pallbearers were Bruce Kiesling, Cory Stelling, Don Redden, James Redden, Brandon Kiesling and Kurt Heinrichs. Following the committal service at the graveside the family and friends gather at the American Logion Post No. 147 of Marion, for a meal and continued time of fellowship and support. For those who preferred, memorial contributions were made to “St. Jude Children’s Hospital”. Memorial contribution envelopes were available at the church and the funeral home or were mailed in care of Wilson-McReynolds Funeral Home, P.O. Box 370, Marion, IL, 62959. For additional information please contact the funeral home by calling 618-993-2131.

The family of Barbara Lee Davenport created this Life Tributes page to make it easy to share your memories.

Send flowers to the Davenport family.