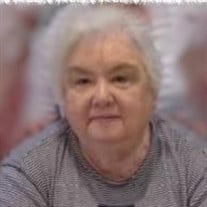 Barbara J. McAlister, age 78, of Marion, IL, passed away peacefully with her family near, at 11:58 p.m. on Thursday, December 31, 2020, in Herrin Hospital of Herrin, IL. She was born on Wednesday, November 18, 1942, in Herrin, the daughter of Charles Frederick and Marjorie Mae (Padgett) Craig. During her young years her family moved several times due to her father’s job as a foreman for the Federal Bureau of Prisons. Her children often heard stories of the various places she had lived during her childhood. In particular there were many stories about her time in Tulelake, CA, Tacoma, WA, and Terre Haute, IN. She was a graduate of Garfield High School of Terre Haute, IN, Class of 1960. After graduation she was united in marriage and was blessed with three children, Christie, Kevin and Toni. She moved to the Marion area in 1964,when her husband took a position at the Marion Federal Prison. During the time of raising her family, Barbara remained at home managing her household , seeing to the needs of her family and raising her children. After her children were older in the early 1980’s, she continued her education at Southern Illinois University of Carbondale, IL where she received her Bachelor’s Degree in Education and later her Certificate in Special Education. In the early 1990’s she began her career in teaching with Williamson County Educational Services. First at Johnston City, IL then at Crab Orchard, IL and later at the Marion Junior High teaching 8th grade until her retirement in 2006. She was a member of Zion United Church of Christ of Marion, and served on the church council and volunteered for the Zion Logos Program where she cooked for the children attending after school on Wednesdays. She was also a member of the Marion Lioness Club where she served as treasurer and the Alpha Delta Kappa Sorority. In her spare time she enjoyed cooking and baking, reading, traveling and going out several times a week to the movies and seeking out the new restaurants of the region with her friends. She loved her family and always looked forward to the many times they all were together. She was always interested in all of their many different activities, especially those of her grandchildren. The many memories created will now be cherished by those she leaves behind. She is survived by two daughters and sons-in-law, Christie and Tony Isbell and Toni and Shawn Shoukletovich all of Marion; son, Kevin McAlister and Gayle McNary of Belleville, IL; seven grandchildren, Caitlin Isbell of Charleston, IL, Chloe Isbell of Marion, Chase Isbell of Marion, Troy McAlister of Indianapolis, IN, Hannah McAlister of Evansville, IN, Mallory Shoukletovich of Nashville, TN and Madison Shoukletovich of Little Rock,AR; sister, Candace Lewis of Marion, and other extended family members and many friends. She was preceded in death by her parents. Arrangements have been entrusted to Wilson-McReynolds Funeral Home, 900 N. Court St., Marion. The graveside service will be on Tuesday, January 5, 2021, at 11:00 a.m. in Oakwood Cemetery of Carterville, IL, with Pastor John Holst presiding. Those wishing to attend the graveside service should gather at the cemetery prior to 11:00 a.m. Interment will follow near her parents in Oakwood Cemetery. It has been requested by the family for those who prefer to make a memorial contributions be to one or all suggested; “Zion United Church of Christ”,“Marion Lioness Club” or “Alpha Delta Kappa Sorority”. Memorial contributions may be mailed in care of Wilson-McReynolds Funeral Home,900 N. Court Street, Marion, IL 62959. Memorial envelopes will also be available at the cemetery and funeral home. For additional information call the funeral home at 618-993-2131. DUE TO HEALTH CONCERNS RELATED TO THE COVID-19 VIRUS AND BY THE SIGNING OF EXECUTIVE ORDER BY THE ILLINOIS GOVERNOR, if you are planning on attending the graveside service it is required you wear a mask and social distance yourself from others.

The family of Barbara Jane McAlister created this Life Tributes page to make it easy to share your memories.

Send flowers to the McAlister family.