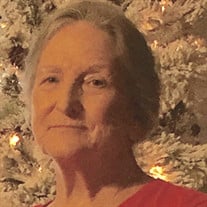 Barbara N. Newbold, age 80, of Creal Springs, IL passed away surrounded by her family at 3:40 p.m. on Wednesday, November 9, 2017, in Barnes-Jewish Hospital of St. Louis, MO. She was born on Wednesday, September 15, 1937, in McCormick, IL of Pope County the daughter of Carlos Aubrey and Edith Blanch (Loless) McCormick. Barbara attended the Oak Grove Country School near Creal Springs and also Marion High School. Later in her lifetime she attended John A. Logan College of Carterville, IL and received her Associate Degree in Nursing as a Licensed Practical Nurse in 1977. She was first united in marriage to J.D. Williams in September of 1952, in Creal Springs and to this union was blessed with four children; Randy, Debra, Joey and Anita. She later was united in marriage to Bobby Gene Newbold in 1983. Barbara had an extensive and long working career. Early in her lifetime she worked at the Cap Factory in Harrisburg, IL. After becoming a Licensed Practical Nurse in 1977, this beginning her 40 year career in nursing, she began working at the Creal Springs Care Center for several years. She later owned and operated her own assisted living center in Marion, IL, for several years. Then in 1991, she moved to Anchorage, Alaska and worked there in an assisted living center until she decided to open and operate her own assisted living center there in Anchorage. Missing home she moved back to Creal Springs in 1994, and began working for Dependable Health Care and Private Agency Nursing for several years. Always willing to try something new, she moved to Tucson, AZ, and began working private duty nursing for Fleming & Curtie Elderly Law Firm where she cared for many of the Broadway Stars. Then in 2002, she opened and operated the LoMacs Assisted Living Center in Tucson for several years until she decided to return back home to Creal Springs in 2009. After returning home she spent her remaining years caring for the health of many of her family members. She was a longtime member of Mt. Moriah General Baptist Church of Creal Springs and also a member of the VFW Ladies Auxiliary of Creal Springs. Her favorite season was fall and she loved traveling around Southern Illinois looking at all the beautiful colors. She also enjoyed spending time outdoors gardening, horseback riding and working on projects around her home. Barbara loved her family and was always interested in all of their many activities. She was often heard saying “That her family was her number 1 accomplishment.” She always was concerned about others, even up to the very end. Helping people was one of her life’s missions and made the most of it and it can be said “She lived a full 80 years.” Those she now leaves behind will always cherish the many memories that have been created. She is survived by four children; Randy Dean Williams and his wife Debbie of Creal Springs, Debra Christina Johnson and her husband Roger of Buncombe, IL, Joey Dale Williams and his wife Rayna of Steelville, IL and Anita Maria Paddock and her husband Stephen of Oakland City, IN; ten grandchildren, Angel Michelle Elston and her husband Bruce of Edinburg, Robert Issac Evetts and his wife Brittany of Buncombe, Jacob Allen Miles and his fiancé Danielle of Creal Springs, Kelsey Dawn Groves and her husband Andrew of Goreville, Cedric Issac Williams of Columbia, MO, Joey Dale Williams and his wife Ciara of Chester, IL, Trevor Tobias Williams, Sarah Maria Christina Williams, Phillip Haviere Williams, and Samuel Moses Williams all of Steelville; twelve great grandchildren, Elizabeth Margaret Meyer and husband Dylan of Riverton, IL, Carey Marie Elston of Edinburg, IL, Ava Monique Isabel Miles of Metropolis, IL, Chloe Brenna Miles of Creal Springs, IL, Payton Dawn Groves and Christopher Paxton Groves both of Goreville, IL, Dalton Edward Hudgens, Zachary David Allen Evetts, Navaeh Evetts, Brooklyn Carmbron and Jason Hays all of Buncombe, IL and Zelda Williams of Chester, IL; sister, Christina Webber of Dahlgren, IL; brother-in-law, Don Wall and his wife Verna Lee of Crab Orchard, IL, and many nieces and nephews, other extended family and friends. She was preceded in death by her parents; two grandsons, Jeremiah Evetts and David Webb; brother, Carlos Archie McCormick and two sisters, Maxine Simms and Afton Wall. Arrangements for Barbara N. Newbold have been entrusted to Wilson-McReynolds Funeral Home, 900 North Court Street, Marion, IL. The time of visitation will be on Saturday, November 11th, from 5:00 p.m. until 8:00 p.m. at the funeral home The funeral service will be on Sunday, November 12, 2017, at 2:00 p.m. at Mt. Moriah General Baptist Church located at 1563 Palzo Road, Creal Springs, IL with Pastor William “Bud” McDannel presiding. Interment will follow in Drake Cemetery of Creal Springs. For those who prefer, memorial contributions may be made to either or both “Drake Cemetery” and “St. Jude Children’s Research Hospital” and mailed in care of Wilson-McReynolds Funeral Home, 900 North Court Street, Marion, IL 62959. Memorial envelopes will be available at the funeral home and church. For additional information call the funeral home at 618-993-2131.

Barbara N. Newbold, age 80, of Creal Springs, IL passed away surrounded by her family at 3:40 p.m. on Wednesday, November 9, 2017, in Barnes-Jewish Hospital of St. Louis, MO. She was born on Wednesday, September 15, 1937, in McCormick, IL of... View Obituary & Service Information

The family of Barbara Nell Newbold created this Life Tributes page to make it easy to share your memories.

Send flowers to the Newbold family.