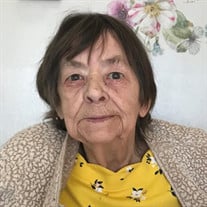 Beatrice Caroline Peters, age 86, of Marion, IL, passed away at 9:25 p.m. on Thursday, March 24, 2022, at her home in Marion, IL. She was born in Chicago, IL, on March 23, 1936, the daughter of Clarence and Virginia Alice May (Woehrle) Stell. Beatrice was united in marriage to Commodore William “Buck” Peters on July 27, 1963, in Wheaton, IL, and together they shared nearly 49 years of marriage until his death on June 20, 2012. She never worked outside of the home and enjoyed her time managing her home and seeing to the needs of her family. She was of the Catholic faith. In her spare time, she enjoyed doing crafts, working in her yard and flowers, listening to her many windchimes and watching her hummingbirds. The family remembers that Mom’s hands could make just about anything; costumes of all kinds, especially Halloween and all kinds of other things. Her hands were always busy. She loved life and was willing to help anyone with a need. The many memories created will always be cherished by those she leaves behind. She is survived by two daughters and sons-in-law, Leanne and Charlie Wheeler of Maple Park, IL, and Nancy and Scott Raines of DeKalb, IL; two sons and daughters-in-law, Ronnie and Judi Lauria of South Elgin, IL and Ken and Jane Laurie of Sunrise Beach, MO; two stepson and step daughters-in-law, Kim and Marilyn Peters of Sand Lake, MI and Jeff and Sherri Peters of Cedar Springs, MI, thirteen grandchildren, three step grandchildren, nineteen great-grandchildren; sister and brother-in-law, Carolyn and Gerald Gilbert of Marion, IL; brother and sister-in-law, Norbert and Sue Wadsworth of Bullhead City, AZ; brother-in-law, Kenneth Nienow of Marion, IL, a host of other extended family and many friends. She was preceded in death by her parents, husband; son, Rick Laurie; four sisters, Constance “Connie” Valenti, Lorie Kujawski, Joan Nienow and Chereen Kelly and brother, Don Stell. Arrangements have been entrusted to Wilson-McReynolds Funeral Home, 900 North Court Street, Marion, IL. The visitation will be on Monday, March 28, 2022, from 12:00 noon to 1:00 p.m. at the funeral home. Following the visitation, the funeral service will be at 1:00 p.m. with Pastor John Holst presiding. Interment will follow next to her husband, in the Rose Hill Cemetery of Marion, IL. For additional information call the funeral home at 618-993-2131.

The family of Beatrice Caroline Peters created this Life Tributes page to make it easy to share your memories.

Send flowers to the Peters family.