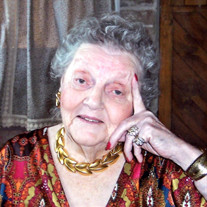 Bessie M. McGuire, age 91, of Marion, IL passed away at 11:53 a.m. on Tuesday, December 1, 2015. She was born in Cobden, IL on Monday, August 4, 1924, the daughter of Dolph and Rena (Boie) Dalton. Bessie was united in marriage to Melvin McGuire in Piggott, AR and together they shared almost 50 years of marriage until his death in 1997. She was the oldest member of Fairview Baptist Church of Creal Springs, IL. Bessie counted being a good mother and grandmother as her most important goals in life. She also lovingly took care of extended family inside and outside her home for many years. She loved the Lord and her Christian faith was the center of her life. Music was also very important to her. Bessie played the piano and together with her daughters sang at many churches and events around the area. She also loved to host family and friends for “jam sessions” playing and singing old-time fiddle tunes and gospel songs. She had a heart for prison ministry and was affectionately known to the inmates at the Marion Camp as “Mama Bessie”. Bessie loved to play Rummy as well as watching her “stories”. In her free time, she was also an avid reader and for years, she was known for holding large annual yard sales (not to mention attending a few herself). Bessie loved piecing together quilts “by hand” and would spend months on a quilt as a special gift. She is remembered for her gracious hospitality and her home was the center for family gatherings. She often showed her love through her cooking and she was known for her made-from-scratch chicken-n-dumplings and homemade rolls. Those who encountered Bessie describe her as generous, kind, having a great sense of humor and a heart of gold. The memories that have been created will now be cherished by those she leaves behind. She is survived by her daughter and son-in-law, Rosemary and Paul Thompson and son, John McGuire all of Marion; four grandchildren, Brian Booton (George) of Rocheport, MO, Charles McGuire (Shauna) and Matthew McGuire both of Marion and Jonathan McGuire of Reno, NV, many nieces and nephews, other extended family and many friends. She was preceded in death by her parents, husband; two daughters, Judith Ann Booton and Ruthie Lane McGuire who passed away as an infant; two sisters, Bonnie McKinney and Lucy Ragain and four brothers, Bill, Robert and Raymond Dalton and Paul Boie. Arrangements were entrusted to the Wilson-McReynolds Funeral Home, of Marion, IL. The time of visitation was from 11:00 a.m. until 1:00 p.m. on Saturday, December 5, 2015, at Fairview Baptist Church, 4315 Saraville Road, Creal Springs, IL. 62922 Following the time of visitation the funeral service was at 1:00 p.m. with Bessie’s son-in-law, Paul Thompson presiding and Rev. Ken Sharp, minister of Fairview Baptist Church assisting. Comments of memory were presented by Bessie’s family; son, John; daughter and son-in-law, Rosemary and Paul and grandsons, Brian Booton and Matthew McGuire. Special vocal musical selections presented during the service were “Amazing Grace” by Lori Seay and Rosemary Thompson with Lori accompanying on the guitar and “I’m Going to a City” by Bessie’s daughter, Rosemary accompanied by her husband Paul on the guitar. Interment followed next to her husband in Fairview Cemetery located adjacent to the church. As the casket was taken from the church; Bessie’s son-in-law, Paul Thompson led the group piping special selections on the bagpipes to the graveside. Pallbearers were Matthew McGuire, George Warren, Charles McGuire, Dean Newbold, Brian Booton, Gary Parks, Jay Robinson and Jerry Jones. Following the committal service at the graveside the family and friends returned back to the church for a meal and continued time of fellowship. For additional information please contact the funeral home by calling 618-993-2131.

The family of Bessie Marie McGuire created this Life Tributes page to make it easy to share your memories.

Send flowers to the McGuire family.