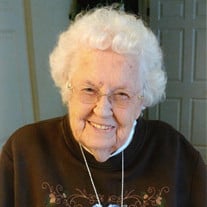 Betty L. Sanders, age 88, of Marion, IL passed away peacefully at 2:30 a.m. on Sunday, August 21, 2016, in the Helia Health Care Center of Energy, IL. She was born on Friday, August 3, 1928, in Jonesboro, IL, the daughter of Adam and Mary (Morse) Johnson. Betty attended school in Wolf Lake, IL and was a graduate of Wolf Lake High School. She was united in marriage to Robert D. “Bob” Sanders, in Osceola, AR and together they shared over 48 years of marriage until his death on Monday, October 4, 1999. She was a member of Second Baptist Church of Marion for many years. In her spare time she enjoyed watching and feeding the birds, spending time outdoors taking care of her yard and planting flowers. Betty enjoyed managing her home and seeing to the needs of her family. Her family was a very important part of her life and she was always interested and encouraged them in all of their activities, especially those of her grandchildren. The many memories that have been created will now be cherished by those she leaves behind. She is survived by three sons and two daughters-in-law, Gail L. Sanders and David L. and Laura Sanders all of Marion and Jerry and Pam Sanders of Goreville, IL; four grandchildren, Hillary Wing and husband Justin of Herrin, IL, Jacob Sanders and Lauryn Sanders both of Marion and Michael Sanders of Tallahassee, FL; great granddaughter, Madelyn Shea Wing of Herrin, other extended family members and many friends. She was preceded in death by her parents, husband and brother Carrol Johnson. Arrangements for Betty L. Sanders were entrusted to Wilson-McReynolds Funeral Home, 900 N. Court St., Marion, IL. The visitation was from 5:00 p.m. until 8:00 p.m. on Thursday, August 25th at the funeral home. The funeral service was at 1:00 p.m. on Friday, August 26, 2016, at Wilson-McReynolds Funeral Home with Rev. Kevin McNeely presiding. The prelude and postlude musical selections were recorded piano selections. Special recorded vocal musical selections presented during the service were “In the Garden” by Patti Page, “How Great Thou Art” by Elvis Presley and “Precious Memories” by The Statler Brothers. Interment followed next to her husband in Rose Hill Cemetery of Marion. Pallbearers were Jacob Sanders, Ron Dobbs, Doug Phillips, Justin Wing, Mark Evans and John Shoot. Following the committal service at the graveside the family and friends gathered at the home of Betty’s son, David, for a meal and continued time of fellowship and support. For additional information please contact the funeral home by calling 618-993-2131.

The family of Betty L. Sanders created this Life Tributes page to make it easy to share your memories.