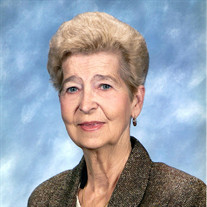 Betty J. Schafer, age 81, of Marion, IL passed away at 6:20 p.m. on Tuesday, November 4, 2014, at her home. She was born on September 22, 1933, in Freeman Spur, IL the daughter of Lovell and Ruby (Miley) Waugh. She grew up in Freeman Spur and Herrin, IL where she attended school. Betty was united in marriage to Harris E. “Gene” Schafer in Marion, on March 25, 1962. Together they shared forty-three years of marriage until his death on April 25, 2005. Her church membership was with Heartland Christian Church of Marion and was a member of the Rebekah Lodge of Marion and Pittsburg, IL. She was retired from Wal-Mart where she was manager of the snack bar and also had worked at Smolers Garment Factory in Herrin, IL for many years. Betty enjoyed caring for her family and home and in her spare time she liked to sew and mend garments and work with different crafts. She loved fishing, camping, growing flowers and working in her yard. Her greatest joy was her family and the times they shared together. She is survived by her three daughters and two sons-in-law, Pam and Bob Underwood of Energy, IL, Paulette and Bob Dirden of Herrin, IL and Kellie Davis and companion, Ron Harrison of Thompsonville, IL; son, Kevin Schafer and wife, Kelly of West Frankfort, IL; six granddaughters, Tori Schafer, Brandy Milani and her husband, David, Carri Carey and her companion, Ray Walsh, Maggie and Shawna Calcaterra, Marty Cameron and husband, Mike, and Kasey Karamichos; three grandsons, Kyle Schafer, Rob Underwood and his wife, Christy and Brendan Quinn, sixteen great grandchildren; sister, Lois Mitchell of Energy, IL; sister-in-law, Thelma Schafer of Pittsburg, IL; brother-in-law and sister-in-law, Jim and Lynn Schafer of Marion, IL; sister-in-law, Brenda Gayer and her husband, Bill of Plumfield, IL and many other extended family members and friends. She was preceded in death by her parents; husband, Gene; great-granddaughter, Kelc Norris in April of 2002 and brother-in-law, Bob Schafer. Arrangements for Betty J. Schafer were entrusted to Wilson-McReynolds Funeral Home, 900 N. Court St., Marion, IL. The time of the visitation for family and friends was from 1:00 p.m. until 3:00 p.m. on Saturday, November 8, 2014, at the funeral home. During the time of visitation a “Reflection of Life” DVD Memorial Tribute featuring special people, places and events of Betty’s life was presented to the family and friends. Following the time of visitation the funeral service was at 3:00 p.m. with Bill Gayer presiding. The prelude and postlude musical selections were recorded piano selections. Special recorded vocal selections presented during the service were “How Great Thou Art” and “He Touched Me” both by Elvis Presley, “In the Arms of an Angel” by Sarah McLachlan and “I Can Only Imagine” by MercyMe. Prior to the message, Bill Gayer presented the vocal musical selection “There Is a River” accompanying himself on the guitar. Interment followed next to her husband in Odd Fellows Cemetery of Marion. Pallbearers were Rob Underwood, Tyler Underwood, Kyle Schafer, Bob Underwood, Brian Masters and Rick Doyle. After the service the family and friends gathered at Lone Oak Baptist Church of Energy, IL for a meal and continued time of fellowship and support. For those who preferred memorial contributions were made to “The Alzheimer’s Association” and mailed in care of Wilson-McReynolds Funeral Home, P.O. Box 370, Marion, IL 62959. Memorial envelopes were available at the funeral home. For additional information please call the funeral home at 618-993-2131.

The family of Betty J. Schafer created this Life Tributes page to make it easy to share your memories.

Send flowers to the Schafer family.