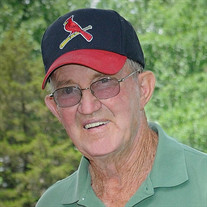 Billie Joe Clendenin, age 78, of Marion, IL passed away peacefully with his family by his side at 5:44 p.m. on Friday, September 30, 2016, in Heartland Regional Medical Center of Marion. He was born on Thursday, July 28, 1938, in Marion, IL, the son of Dave Harrison and Myrtie (Presley) Clendenin. Billie Joe was united in marriage to Joyce A. Pearson on Friday, March 27, 1964, in Cahokia, IL and together they have shared over 52 years of marriage. Early in his lifetime, his working career was with the Norge Company in Herrin, IL from 1963 until 1972. Then in 1972, he began working for the Terrace Fence Company of Marion, as a fence installer and remained with the company for the next 30 years until his retirement in 2001. He has been a member of the Spillertown Baptist Church of Marion, for many years. He always kept busy during his lifetime but in his spare time he had many interests that he enjoyed. He was an avid fisherman, that some might call an obsession, spending time in the outdoors, hunting, being around horses and was a former member of the Williamson County Saddle Club, camping and was a former member of the Renegade Camping Club, playing league slow pitch softball and was on the “RC Cola Team”, coaching baseball with the Johnston City Little League and was a St. Louis Cardinal fan. Though he was always busy, the most important part of his life was his family, always enjoying the many times they would all be together. The many memories that have been created will now be cherished by those left behind. He is survived by his wife, Joyce A. Clendenin of Marion; three sons and two daughters-in-law, Bill and Sue Clendenin and Bruce Clendenin all of Marion and Jeff and Tammy Vishino of Pompano Beach, FL; daughter and son-in-law, Sheila and Ed Shaw of Johnston City, IL; five grandchildren, Keri Johnson and her husband Greg of Christopher, IL, Lindsey Alford of Johnston City, Jacob Clendenin and Jason Clendenin both of Marion and Joyce Ann Vishino of Pompano Beach; two great granddaughters, Josie Alford and Reece Johnson; great grandson, Trevor Johnson, brother and sister-in-law, Rev. Cecil and Carol Clendenin of Marion; sister, Mary “Midge” Jeralds of Marion, other extended family and many friends. He was preceded in death by his parents; two sisters, Neva Hamel and Nancy Little and five brothers, Theodore, Roy, Dee, Bob and Paul Clendenin. Arrangements for Billie Joe Clendenin were entrusted to Wilson-McReynolds Funeral Home, 900 N. Court St., Marion, IL. The visitation was from 5:00 p.m. until 8:00 p.m. on Monday, October 3rd, at Spillertown Baptist Church, located at 110 N. Spillertown Road, Marion, IL. Visitation resumed on Tuesday morning after 9:30 a.m. at the church and lasted until the time of the service at 1:00 p.m. During the time of visitation a “Reflection of Life” DVD Memorial Tribute featuring special people, places and events in Joe’s life was presented to the family and friends. Following the time of visitation the funeral service was at 1:00 p.m. on Tuesday, October 4, 2016, with Rev. Steve Shea presiding and Rev. Chris Clendenin assisting. The prelude and postlude musical selections were presented by pianist, June James. Special vocal musical selections presented during the service were “Holy Ground” by Jeanine Lowe and “Beulah Land” by Arlowyne Culpepper both with recorded accompaniment. Special recorded vocal musical selection presented during the service was “Wish You Were Here” by Tim Surrett. Interment followed in Rose Hill Cemetery of Marion. Pallbearers were Ted Clendenin, Garry Clendenin, Tim Jeralds, Larry Little, Ronnie Little and Jim Little. Following the committal service at the cemetery the family and friends gathered back at Spillertown Baptist Church for a meal and continued time of fellowship and support. For those who preferred, memorial contributions were made to either “Spillertown Baptist Church,” or “Johnston City Little League” and mailed in care of Wilson-McReynolds Funeral Home, 900 N. Court Street, Marion, IL 62959. Memorial envelopes were available at the church and the funeral home. For additional information please contact the funeral home by calling 618-993-2131.

Billie Joe Clendenin, age 78, of Marion, IL passed away peacefully with his family by his side at 5:44 p.m. on Friday, September 30, 2016, in Heartland Regional Medical Center of Marion. He was born on Thursday, July 28, 1938, in Marion, IL,... View Obituary & Service Information

The family of Billie Joe Clendenin created this Life Tributes page to make it easy to share your memories.

Send flowers to the Clendenin family.