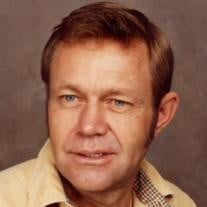 Billie Joe “Mac” McKinney, Sr. age 78, of Marion, IL passed away at 12:30 p.m. on Saturday, November 17, 2012, at home with his family by his side. He was born, Friday, March 2, 1934, in rural Marion, IL the son of William Ralph and Maggie (Davis) McKinney. The family moved to the Scottsboro area when he was age 3 and he attended school in Marion, IL and graduated from Marion High School in 1952. He was united in marriage to Sandra Ann “Dody” Furlow on Saturday, April 28, 1984, in Las Vegas, NV and together they have shared the last twenty-eight years of marriage. Bill answered the call of this nation by enlisting in the United States Navy during the time of the Korean War. After his period of faithful service he was honorably discharged with the rank of Radioman Third Class. He was a member of the Lake of Egypt Christian Church and he also was a life member of Masonic Fellowship Lodge No. 89 AF & AM of Marion, IL. Early in his working career Bill worked for General Telephone of Marion, IL. He later moved to the Evansville, IN area and began working with General Electric Corporation as a computer technician. In 1979, he moved to Arizona and began working for Prime Computers, Inc. traveling all over the southwest as their computer technician. After his marriage in 1984, he and his wife Dody moved to Marion, IL in 1985 and he began working for Southern Illinois University of Carbondale in the custodial department until his retirement in 1994. He enjoyed antiquing and after moving to Marion he and Dody owned and operated two antique businesses. They also loved to travel, and have traveled all over this nation including a trip to Alaska. In his spare time he enjoyed coin and knife collecting, singing and playing the Omnichord especially at church and was known for being a “Do-it-Yourselfer” being able to complete just about anything he attempted. Though he always kept busy through work and all his other activities, the most important part of his life was his family. He always took interest in their many activities, especially those of his children and grandchildren. The many memories that were created will now be cherished by those he leaves behind. He is survived by his wife, Sandra A. “Dody” McKinney of Marion, IL; daughter and son-in-law; Bridget and Jae Dale of Tucson, AZ; eight grandchildren, Justin Lomba and his wife, Tara, Brianna Lomba Hall and her husband, John, Julia Lott and her husband, Nathan, Joey McKinney, Alex McKinney and her fiancé, Nick Rucker, Billie McKinney III, Allyson McKinney Burgrabe and Karsen McKinney Burgrabe, eleven great grandchildren; three step sons & two step daughters-in-law, Donald & Patti Howland of Amsterdam, NY, Patrick Howland of San Diego, CA and Timothy & Michelle Howland of Pottersville, NY; five step-grandchildren, Alex Howland, Katie Howland, Johna Howland, Timmy Howland, and Anna Howland; sister, Myrl Baskett of Marion, IL; brother & sister-in-law, Ronald & Deannna McKinney of Marion, IL; two aunts, Alma McKinney and Afton Collier both of Marion, IL; nieces, Renee Kirby and husband, Chris of Goreville, IL, Tracy Watson and husband, Greg of Marion, IL and Cindy Comp and husband, Pat of Marion, IL; nephew, Kenneth Turner of Marion, IL, other extended family and many friends. He was preceded in death by his parents; son, Billie McKinney Jr.; sister, Reola Mae McKinney who died at the age of 11 months and nephew, Stephen McKinney. Arrangements for Billie Joe “Mac” McKinney, Sr. were entrusted to the Wilson-McReynolds Funeral Home, 900 N. Court Street, Marion, IL. A time of visitation for family and friends was on Wednesday, November 21, 2012, from 10:00 a.m. until 12:00 noon at the funeral home. During the time of visitation a “Reflection of Life” DVD Memorial Tribute featuring special people, places and events of Billie’s life was presented to the family and friends. Following the time of visitation the memorial service was at 12:00 noon with Rev. Leroy Waggoner presiding. During the service, Rev. Waggoner read a poem titled “A Father Just Like You” that was written by Billie’s daughter, Bridget. At the beginning of the service a Masonic Farewell Service was accorded by members of Fellowship Masonic Lodge No. 89 AF & AM of Marion, IL. Those members participating were Master, Jerry Liska; Marshall, Brian Duke; Secretary, Charlie Adams; Chaplain, Bob Russell and members, Dave McGee, Thomas Whittle and Bob Wilson. Special recorded vocal musical selections presented were “Amazing Grace” by Billie McKinney and his son-in-law, Jae Dale, “I’m Already There” by Lonestar and “God Bless the USA” by Lee Greenwood. The service concluded with military honors accorded at the funeral home by members of the V.F.W. Heyde-Pillow Post No. 1301, American Legion Post No. 147 and the Illinois National Guard Flag Detail, all of Marion, IL. Those participating were Commander, Larry Largent; Chaplain, Ernie Rinella; Officer of the Day, Pat Campbell; Bugler, Jim Grieme; Color Guard, Ralph DeVasier and Jessie James; National Colors, Dan Fruge; VFW Colors, Bill Rice; American Legion Colors, Bill Reynolds and Firing Squad, Don Burgrabe, Bill Hampsey, Bill Hatfield, Fred Read, Ron Russell, Bill Stewart and Jerry Swisher. Members of the National Guard Flag Detail participating in the folding of the flag were SGT Jeremie Moon and SGT Bradley Duclos. Presentation of the folded flag to Billie’s wife, Doty was by SGT Jeremie Moon. Following the military service at the funeral home the family and friends gathered at Lake of Egypt Christian Church for a meal and continued time of fellowship and support. Interment followed later in the day on Wednesday, November 21st, in Freedom Cemetery south of Marion, IL. In lieu of flowers, memorial contributions were made to either the “Lake of Egypt Christian Church” or “Hospice of Southern Illinois”. Memorial contribution envelopes were available at the funeral home or were mailed in care of Wilson-McReynolds Funeral Home, P.O. Box 370, Marion, IL, 62959. For additional information, please call 618-993-2131.

The family of Billie Joe "Mac" McKinney created this Life Tributes page to make it easy to share your memories.

Send flowers to the McKinney family.