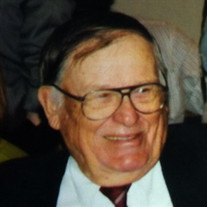 Bob “Joe Bob” Marks, of Marion, IL passed away peacefully at 4:00 a.m., on Tuesday, July 8, 2014, at his home. He was born on Friday, February 27, 1925, in Marion, IL the son of Virgil Thomas and Ulva (Buckner) Marks. Joe Bob, as he was known, answered the call of the nation by enlisting into the United States Navy Air Corps, during the time of WW II, and was a turret gunner and also did turret gun training. After his period of faithful service he was honorably discharged. After returning home from service, he began his early working career at Sangamo Electric, located west of Marion, as a supervisor for many years. He later began working for The Golden Rule Insurance Company, as one of their agents, representing all of southern Illinois and the area school districts until his retirement in 1985. He was united in marriage to Mary D. Cullison on Friday, July 14, 1972, in Karnak, IL and together they have shared nearly forty-two years of marriage. He was a former member for many years at Cedar Grove United Methodist Church of Marion, where he also taught Sunday school. He currently is a member of Aldersgate United Methodist Church of Marion, IL. Some of his other affiliations include the Marion Elks B.P.O.E. where he served as past Exalted Ruler and the Marion American Legion Post No. 147. Joe Bob loved nature and the outdoors. He enjoyed fishing and hunting, especially squirrels, deer and turkey and even hunted moose and bear in Canada. He looked forward to the springtime to go mushroom hunting, ginseng hunting in the fall, arrowhead hunting, working on and repairing fishing boats and motors. He also enjoyed reading and learning more about nature, herbs and anything pertaining to the outdoors. He loved his family and always took interest in their many activities; especially those of his grandchildren. The many memories that have been created will now be treasured by those left behind. He is survived by his wife, Mary D. Marks of Marion, IL; three daughters, Judy Ward and Pam Todd both of Marion, IL and Cathy Walker and husband, Steve of Nashville, TN; son, Doug Marks and wife, Betsy of Nashville, TN; nine grandchildren, Jennifer Little and her husband, Riley of Marion, IL, Ryan Ward of Eldorado, IL, Abigail Anselment and husband, John of Marion, IL, Katie Todd of Marion, IL, Christopher Walker and wife, Brooke of Hilton Head, SC, Nicholas Walker and Mary Catherine Walker both of Nashville, TN and Teaghan Campbell and Justin Campbell both of Nashville, TN, eight great grandchildren; sister-in-law, Venita Marks of Marion, IL; special friend, Kenny Johnson of Marion, IL, other extended family and many friends. He was preceded in death by his parents and brother, Lloyd “Harpo” Marks. Arrangements for Bob “Joe Bob” Marks were entrusted to Wilson-McReynolds Funeral Home, 900 N. Court St., Marion, IL. A time of visitation for family and friends was on Friday, July 11, 2014, from 11:00 a.m. until 1:00 p.m. at the funeral home. A “Reflection of Life” DVD Memorial Tribute featuring special people, places and events of Joe Bob’s life was presented to the family and friends. Following the time of visitation the funeral service was at 1:00 p.m. with Pastor Steve Malroy presiding. Comments of memory were presented by Joe Bob’s grandchildren, Christopher Walker and RyanWard. The prelude and postlude musical selections were presented by pianist, Lori Creamer. Special vocal selections presented during the service were “Amazing Grace, My Chains are Gone” and “God Be With You Till We Meet Again” by vocalist, Lori Creamer who accompanied herself on the piano. Interment followed in Lake View Cemetery east of Johnston City, IL. Honorary pallbearers were Steve May and Everett Grant. Active pallbearers were Doug Marks, Steve Walker, Ryan Ward, Christopher Walker, Nicholas Walker and Kenny Johnson. Military honors were accorded at the graveside by members of Heyde-Pillow V.F.W. Post No. 1301, American Legion Post No. 147 both of Marion and the US Navy Operational Support Center of St. Louis, MO. Those participating were Commander and Chaplain, Dan Fruge; Officer of the Day, Larry Largent; Bugler, Jim Grieme; Color Guard, Bill Rice and Jessie James; National Colors, Jeff Hoffard and Firing Squad, Don Burgrabe, Bill Hampsey, Bill Hatfield, Bill Reynolds and Ernie Rinella. Member of the US Navy Operational Support Center of St. Louis, MO participating in the folding of the flag were OS1 Mark Rulo and PS3 Ralph Abueg. Presentation of the folded flag to Joe Bob’s wife, Mary was by OS1 Mark Rulo. Following the committal service at the cemetery the family and friends gathered at Aldersgate United Methodist Church of Marion, for a meal and continued time of fellowship and support. For those who preferred, memorial gifts were made to either “Hospice of Southern Illinois” or “This Able Veteran” an organization returning hope to injured veterans and their families by providing them the highest-quality Service Dogs. Memorial contribution envelopes were available at the funeral home or were mailed in care of Wilson-McReynolds Funeral Home, P.O. Box 370, Marion, IL 62959. For additional information please contact the funeral home by calling 618-993-2131.

The family of Bob "Joe Bob" Marks created this Life Tributes page to make it easy to share your memories.

Send flowers to the Marks family.