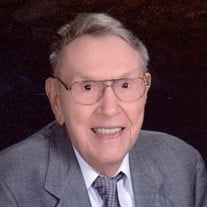 Bracy D. Smith, age 99, of Marion, IL passed away peacefully at 5:57 p.m. on Sunday, September 2, 2018, in Parkway Manor of Marion. He was born on Tuesday, March 25, 1919, in Carterville, IL, the son of Clifford G. and Minnie (Bracy) Smith. Bracy attended school in Marion and was a graduate of Marion High School Class of 1936. He continued his education by attending the University of Illinois in Champaign, IL where he received his Bachelor Degree in Accounting. In 1983, he was honored by being elected Alumnus of the Month by the College of Commerce and Business Administration. He answered the call of this nation by enlisting into the United States Navy during the time of WW II and faithfully served until he was honorably discharged with the rank of Lieutenant. Bracy was first united in marriage to Lisbeth Gross on Saturday, October 7, 1939, in Crown Point, IN and together they shared over 47 years of marriage until her death in March of 1987. He later was united in marriage to Elisabeth H. “Babe” (Feurer) Armstrong on Saturday, June 20, 1987, in Marion and together they shared over 21 years of marriage until her death on Friday, January 9, 2009. He later was united in marriage to Rita A. (Schloemer) McMullen on Saturday, March 26, 2011, in Marion and together they have shared over 7 years of marriage. Bracy’s working career was with the U.S. Steel Corporation, working in Pittsburg, PA and New York for 42 years, advancing with the company to the level of Comptroller and Senior Vice President at the time of his retirement. For many years he was a member of Zion United Church of Christ in Marion. After his marriage to Rita in 2011, he converted, joined and faithfully attended St. Joseph Catholic Church of Marion. During his lifetime, Bracy enjoyed golfing and once had the opportunity to golf with Arnold Palmer. He also enjoyed bowling and bowled in a league up to the age of 97. He loved taking cruises and had traveled to many places all over the world. He loved to get together with his family and many friends. The many memories created will now be cherished by those he leaves behind. He is survived by his wife, Rita McMullen Smith of Marion; niece, Judy Conejo and her husband, David, of Gallup, NM; three nephews, Pat Fosse and his wife, Jane, of Jackson, MO, Mike Fosse of Fort Walton Beach, FL and Greg Smith and his wife, Pam, of Paducah, KY; step daughter-in-law, Sharon Armstrong of Carbondale, IL; two step daughters, Erin Kern and her husband, Mark, of Belleville, IL and Kelly McMullen and her husband, Fred Lerner, of Chicago, IL; three step sons, Norman “Mick” McMullen and his wife, Sue, of Frankfort, IL, Kerry McMullen and his wife, Lori, of Pickerington, OH and Scott McMullen and his wife, Julie, of LaGrange Park, IL, a host of other family, extended family, and many friends. He was preceded in death by his parents; two wives; son, Kenneth Smith; daughter, Leslie Dee Smith; stepson, William Anthony “Tony” Armstrong; sister, Mary Fosse and two brothers, Donald E. Smith and Clifford Smith and nephew, Bruce Fosse. Arrangements were entrusted to Wilson-McReynolds Funeral Home, 900 North Court Street, Marion, IL. A time of visitation was from 9:30 a.m. to 10:00 a.m. on Saturday, September 15, 2018, at the funeral home. Following the time of visitation the memorial service was at 10:00 a.m. with Father Brian Barker presiding. The prelude and postlude musical selections were recorded piano selections. Special vocal musical selections presented during the service were “Amazing Grace” and “How Great Thou Art” and original song “On the Road” all by Father Brian Barker who accompanied himself on the piano. Special comments of memory were presented by Sharon Armstrong, Judy Conejo, and Zac Boyd. Military honors were accorded at the funeral home by members of Heyde-Pillow V.F.W. Post No. 1301 and Williamson Post 147 American Legion Ritual Team of Marion, and members of the United States Navy Funeral Honors Burial Detail. Members participating of the United States Navy Petty Officer First Class Scott Linne and Petty Officer First Class Bill Kanndy. Presentation of the folded flag to Rita was by Petty Officer First Class Scott Linne. V.F.W. members participating were Commander Dan Fruge, Chaplin Ray Hancock, Officer of the Day Ron Phillips, Bugler Bill Rice, Sr., Colors, Art Ambros, Color Guard John Andrew and Herbert Robinson, and Firing Squad Bill Hatfield, Gene Broombaugh, Merlin Koester, Bob Wallace, and Bill Hampsey. Following the military rites accorded at the funeral home family and friends gathered at the St. Joseph Catholic Church for a meal and continued time of fellowship and support. Interment took place on Bracy’s parents’ lot in Maplewood Cemetery of Marion, IL on Thursday, September 20, 2018 at 1:00 p.m. For those who preferred, memorial contributions were made to either or both “Hospice of Southern Illinois” and/or “The Light House Shelter” of Marion. Memorial contribution envelopes were available at the funeral home or were mailed in care of Wilson- McReynolds Funeral Home, 900 North Court Street, Marion, IL 62959. For additional information call the funeral home at 618-993-2131.

The family of Bracy Dee Smith created this Life Tributes page to make it easy to share your memories.

Send flowers to the Smith family.