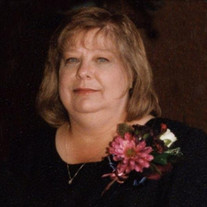 Brenda S. Beasley, age 65, of Marion, IL, passed away suddenly with her family by her side at 7:19 P.M. on Sunday, August 4, 2019, in Heartland Regional Medical Center of Marion. She was born in Marion, on Thursday, September 17, 1953, the daughter of Willie Virgil and Susie Mae (Shotton) Hudgens. Brenda attended school in Marion and was a graduate of Marion High School Class of 1971. She was united in marriage to Roger Wayne Beasley on Friday, October 16, 1970, in Crab Orchard, IL at the home of Roger’s parents, Lowell and Lola Beasley and together they have shared nearly 49 years of marriage. Early in her lifetime Brenda remained at home seeing to the needs of her family and managing her home. She later became involved with her husband, Roger as the office manager of Beasley Auto Body of Marion. She helped all around in the business from making appointments, ordering parts, billing and even from time to time in the repairs. She was of the Baptist faith and earlier in her lifetime attended at McKinney Chapel Baptist Church near the Lake of Egypt, IL. Brenda was a board member of the Marion Main Street Organization and helped organize the Marion Main Street Cruise Nights for many years. She also enjoyed going to Car Shows, Drag Races, Hot Rod Reunions and looked forward every year to the Street Machine Nationals. She enjoyed helping her husband restore “Muscle Cars” and in the early 1990’s they restored a 1970 Chevy Chevelle SS for a client that was rated the #1 Restored Car in the Nation for 3 straight years. She loved her family and was always interested in all their activities and enjoyed the many times they would be together. The many memories created will now be cherished by those she leaves behind. She is survived by her husband, Roger W. Beasley of Marion; daughter, Tammy S. Beasley and her fiancé Jody Wright and his daughter, Cadynce Wright all of Marion; brother and sister-in-law, Michael D. and Patti Hudgens of Johnston City, IL; two sisters-in-law, Joyce Owens and her husband, Norman and Bonieva “Bonnie” Darter and her husband, Mike all of Marion, several nieces, nephews, great nieces and great nephews, other extended family and many friends. She was preceded in death by her parents and father-in-law and mother-in-law, Lowell and Lola Beasley. Arrangements for Brenda S. Beasley have been entrusted to Wilson-McReynolds Funeral Home, 900 N. Court St., Marion. The visitation will be from 5:00 p.m. until 8:00 p.m. on Wednesday, August 7th at the funeral home. The funeral service will be at 11:00 a.m. Thursday, August 8, 2019, with Rev. Keith Owens and Rev. Jeff Owens presiding. Interment will follow in Rose Hill Cemetery of Marion. For those who prefer, memorial contributions may be made to “The American Diabetes Association” and may be mailed in care of Wilson-McReynolds Funeral Home, 900 N. Court Street, Marion, IL 62959. Memorial envelopes will be available at the funeral home. For additional information call the funeral home at 618-993-2131.

Brenda S. Beasley, age 65, of Marion, IL, passed away suddenly with her family by her side at 7:19 P.M. on Sunday, August 4, 2019, in Heartland Regional Medical Center of Marion. She was born in Marion, on Thursday, September 17, 1953, the... View Obituary & Service Information

The family of Brenda Sue Beasley created this Life Tributes page to make it easy to share your memories.

Send flowers to the Beasley family.