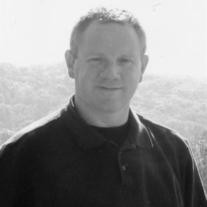 Brian C. Shafer, age 38, of Marion, IL, passed away of natural causes with his family at his side at 3:02 a.m., on Sunday, December 4, 2011, in Heartland Regional Medical Center in Marion, IL. He was born in Marion, IL on Tuesday, April 3, 1973, the son of Steven Charles and Camille (Hubbard) Shafer. Brian attended school in Marion and was a graduate of Marion High School in 1991. He also attended John A. Logan College of Carterville and had an Associate Degree in Business. He was united in marriage to Stephanie R. Sharp, his high school sweet heart on April 21, 1995. They loved each other very much and together they have shared nearly seventeen years of marriage. He always had a passion for trains and his working career for the last 13 years has been with the Canadian National Railway as a Train Master for the Southern Illinois territory. He was a member of Marion Third Baptist Church. Some of his other memberships were the Brotherhood of Locomotive Engineers and the Southern Illinois Train Club. His family was one of the most important parts of his life. He loved spending time with them all; especially watching his children participate in their many sport activities, watching his daughter, Carlie dance, helping Brianna build a pen to raise ducks and railfanning with his son, Andrew. He will be remembered as “One of the Best Dads” anyone could have known. In his spare time he enjoyed building items and was very good at repairing things and was always willing to help others. He is survived by his wife, Stephanie R. Shafer of Marion; son, Andrew Charles Shafer, age 16; two daughters, Brianna Paige Shafer, age 12 and Carlie Marie Shafer, age 4; mother and step father, Camille and Vern Goode of Marion; father and stepmother, Steve and Francie Shafer of Carterville, IL; sister, Jennifer Shafer-Robinson of O’Fallon, MO; mother-in-law, Peggy Ledbetter of Marion; grandmother-in-law, Barbara Giannoni of Marion; aunt, Susan Shafer-Leverda of Tucson, AZ; special lifelong friends, Patrick Randolph, Johnny Norris and Paul Shirley, several other aunts, uncles and cousins, other extended family and many friends. He was preceded in death by his maternal grandparents, Roe and Maxine Hubbard and paternal grandparents, Charles and Patricia Shafer. Arrangements for Brian C. Shafer were entrusted to the Wilson-McReynolds Funeral Home, 900 N. Court Street, of Marion, IL. A time of visitation for family and friends was from 5:00 p.m. until 8:00 p.m. on Wednesday, December 7th, at Marion Third Baptist Church, located at 1102 E. Boulevard Street, in Marion. During the time of visitation a “Reflection of Life” DVD Memorial Tribute featuring special people, places and events of Brian’s life was presented to the family and friends. The funeral service was on Thursday, December 8, 2011, at 10:30 a.m. at Marion Third Baptist Church with Pastor Scott Kallem presiding. Comments of memory were presented by Brian’s friends; Matt Odum, Patrick Randolph, Robbie Lindhorst and his sister, Jennifer Shafer-Robinson. Special vocal musical selections presented during the service were “Word of God Speak”, “I Can Only Imagine”, “I Will Rise” and “Amazing Grace, My Chains Are Gone” all by John Browning with recorded accompaniment. Pallbearers were Andrew Shafer, Patrick Randolph, Johnny Norris, Paul Shirley, Matthew Sharp and Matt Odum. Following the service the family and friends gathered in the family center of Third Baptist Church for a meal and continued time of fellowship and support. For those who preferred, memorial contributions were made to his children’s college fund. Checks were made payable to “Stephanie Shafer”. Memorial contribution envelopes were available at the church or were mailed in care of Wilson-McReynolds Funeral Home, P.O. Box 370, Marion, IL 62959. For additional information please call the funeral home at 618-993-2131.

Brian C. Shafer, age 38, of Marion, IL, passed away of natural causes with his family at his side at 3:02 a.m., on Sunday, December 4, 2011, in Heartland Regional Medical Center in Marion, IL. He was born in Marion, IL on Tuesday, April 3,... View Obituary & Service Information

The family of Brian C. Shafer created this Life Tributes page to make it easy to share your memories.

Send flowers to the Shafer family.