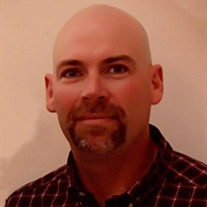 Bryan “Scott” Campbell, 47, of Jamestown, ND, formerly of Creal Springs, IL passed away on October 29, 2017, at the Roger Maris Center of Fargo, ND. Scott was born on Sunday, February 1, 1970 in Valparaiso, IN, the son of Ronald Scott and Janet Marie (Thompson) Campbell. As a child he attended school in Creal Springs and was a graduate of Marion High School, Class of 1988. He married Kimberly Dugaro on Monday, January 31, 2011 in New Orleans, LA and together they have shared over 6 years of marriage. Scott and Kimmie moved to North Dakota in 2014 and he began working for Great River Energy of Spiritwood, ND as a Mechanic/Plant Technician 1. He was an avid motorcycle rider and enjoyed working on cars. Scott was also a welder and member of IBEW. He enjoyed spending time with his family and many friends. Scott is survived by his parents, Ronald and Janet Campbell of Creal Springs; wife, Kimberly “Kimmie” Campbell of Jamestown, ND; daughter, Keelie (Kyle) Bartruff of Anna, IL; two step-sons, Logan (Tami) Curry of Fort Leonard Wood, MO and Joseph Curry of Harrisburg, IL; three grandchildren, Cole and Cannen Bartruff, and Sofia Curry; sister, Sissy (Tony) Maze of Marion, IL; two nephews, Clay (Cherie) Craig and Chase Craig; one niece, Olyvia Craig all of Marion, IL; father-in-law, Steve Dugaro of Eldorado, IL, aunts, uncles, cousins, extended family, and many friends. Scott was preceded in death by his maternal and paternal grandparents and mother-in-law, Janet Dugaro. Arrangements have been entrusted to Wilson-McReynolds Funeral Home, 900 N. Court St., Marion. The visitation will be from 11:00 a.m. until 2:00 p.m. on Friday, November 3rd, at the funeral home. Following visitation, the funeral service will be at 2:00 p.m. with Pastor Keith McDaniel presiding. Interment will follow in Creal Springs Cemetery. For those who prefer, memorial contributions may be made for the family to Kimberly Campbell or Keelie Bartruff and mailed in care of the funeral home, 900 North Court Street, Marion, IL 62959. Memorial envelopes will be available at the funeral home. For additional information call the funeral home at 618-993-2131.

The family of Bryan "Scott" Campbell created this Life Tributes page to make it easy to share your memories.

Send flowers to the Campbell family.