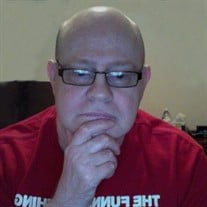 Calvin E. Johnson, age 66, of Marion, IL, formerly of Chicago, IL, passed away at 3:45 p.m. on Sunday, December 10, 2017, at his home in Marion. He was born in Waverly, TN, on Monday, April 16, 1951, the son of Calvin Turner and Ruby (Cooper) Johnson. At the age of 1½, he was given to his aunt, Maxine “Bobbie” Johnson who raised him to an adult. After graduation from high school, Calvin answered the call of this nation by serving in the United States Army from February of 1971, until the time of his honorable discharge in October of 1972, with the rank of Specialist 4th Class. Calvin was united in marriage to Deborah LeAnn Kubiak on Saturday, November 23, 1974, in Chicago and together they have shared 43 years of marriage. His working career was with Illinois Tool Works Corporation of Chicago as a Tool Grinder for many years until his health forced him to retire. In his spare time he enjoyed spending time with his grandson, Anderson flying drones. Calvin also was very knowledgeable about computers, writing his own programs and created his own BBS (Bulletin Board System) before the development of the internet. He also was an avid football fan, especially of the Kansas City Chiefs. He always kept busy, but he was always interested about all the activities of his family, especially of his daughter and grandchildren. He loved the times they all would be together and the many memories that have been created will now be cherished by those he now leaves behind. He is survived by his wife, Deborah L. Johnson of Marion; daughter, Nikki D. Johnson of Marion; granddaughter, Rian Stallings of Marion; grandson, Anderson Hayter of Marion; mother-in-law, Doris Mand of Chicago; three brothers-in-law, Russ Sarch and his wife Kathy of Park Ridge, IL, Mike Sarch of Chicago and Robert Kubiak of Chicago; special caregiver, Melynda Mercer of Marion, other extended family and many friends. He was preceded in death by his parents; brother, Gary Johnson; sister, Linda “Sissy’ Johnson; brother, Robert Johnson and his father-in-law, Ralph Mand. Arrangements for Carl E. Johnson have been entrusted to Wilson-McReynolds Funeral Home, 900 N. Court St., Marion. At this time there will not be any public services accorded. For those who prefer, memorial contributions may be made to “Wilson-McReynolds Funeral Home” (to help the family with final expenses), and mailed in care of Wilson-McReynolds Funeral Home, 900 N. Court Street, Marion, IL 62959. Memorial envelopes will be available at the funeral home. For additional information call the funeral home at 618-993-2131.

The family of Calvin Eugene Johnson created this Life Tributes page to make it easy to share your memories.