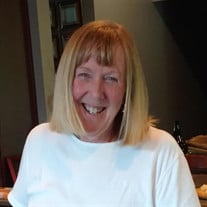 Carol Elaine Fisher, age 68, of Carterville, IL, passed away peacefully with her family at 9:00 p.m. on Tuesday, August 31, 2021, at her home. She was born on Monday, June 22, 1953, in Washington, Pennsylvania, the daughter of William Laverne “Bill” and Juanita “Sue” (Reese) Loveless. Later in life her mother married her step father, Charles “Chuck” Goodwin who she also considered a father. Carol was united in marriage to Bruce Warren Fisher, on Saturday, September 4, 1993, in Wesley United Methodist Church of Vergennes, IL, and together they have shared nearly 28 years of marriage. Her working career has been diverse; she began as an X-Ray Technician for Marion Memorial Hospital, Credit Manager of the Southern Illinoisan Newspaper, Business Manager for Gateway Foundation and her last employment was with Southern Illinois University of Carbondale in work force development until her retirement in 2013. She has been a member of Our Lady of Mount Carmel Catholic Church of Herrin, IL, since 1997. In her spare time, she enjoyed interior decorating and organizing, landscape designing, working in her flowers and gardening. Christmas time was her favorite time of the year and enjoyed spending time with her family and friends. The many memories that have been created will now be cherished by those she leaves behind. She is survived by her husband, Bruce W. Fisher of Carterville, IL; son, Andrew Freeman and his wife, Alice of Marion, IL; three grandchildren, Hannah McGee and her husband, Chase of San Diego, CA, Thomas Williams of Marion, IL, and Matthew Williams of Marion, IL; father-in-law and mother-in-law, Kenny and Phyllis Fisher of Carbondale, IL; brother-in-law, Brett Fisher and his wife, Margie of Prior Lake, MN; niece, Elizabeth Fisher and nephew, Braden Fisher both of Prior Lake, MN; stepmother, Paula Yellam of San Diego, CA; two stepsisters, Kim Herrera and Sandy Fewkes both of CA; friend, Patricia James of Murphysboro, IL, many cousins from the “Morgan and Reese Families” of Marion, IL, other extended family and many friends. She was preceded in death by her parents, William Laverne Loveless and Juanita “Sue” Goodwin (Reese) and her stepfather, Charles “Chuck” Goodwin. Arrangements have been entrusted to Wilson-McReynolds Funeral Home, 900 North Court Street, Marion, IL. Due to the executive order by the Governor of Illinois, those attending the visitation and Funeral Mass, must wear a face mask and practice social distancing. The visitation will be on Wednesday, September 8, 2021, from 9:00 a.m. to 11:00 a.m. at Our Lady of Mount Carmel Catholic Church, located at 316 West Monroe Street, Herrin, IL. Following the visitation, the Funeral Mass will be at 11:00 a.m. with Father Mark Reyling presiding. Interment will follow in OddFellows Cemetery of Marion, IL. The family requests for those who prefer, memorial contributions be given to either or both; “Hospice of Southern Illinois” and/or “The Humane Society of Southern Illinois.” Memorial contributions may be mailed in care of Wilson-McReynolds Funeral Home, 900 N. Court Street, Marion, IL, 62959. Memorial envelopes will be available at the church funeral home. For additional information call the funeral home at 618-993-2131.

Carol Elaine Fisher, age 68, of Carterville, IL, passed away peacefully with her family at 9:00 p.m. on Tuesday, August 31, 2021, at her home. She was born on Monday, June 22, 1953, in Washington, Pennsylvania, the daughter of William Laverne... View Obituary & Service Information

The family of Carol Elaine Fisher created this Life Tributes page to make it easy to share your memories.

Send flowers to the Fisher family.