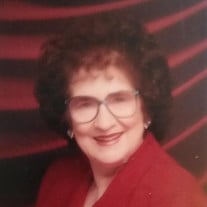 Carol C. French, age 88, of Marion, IL, formerly of the Springfield, IL area, passed away peacefully with her family near, at 7:52 a.m. on Saturday, February 27, 2021, in the “Linda E. White Hospice Facility” of Evansville, IN. She was born on Thursday, July 28, 1932, in Greenfield, IL, the daughter of Fred and Millie (Dawson) Crabtree. Carol attended school in Carlinville, IL, and was a graduate of Carlinville High School Class of 1949. She continued with her education attending at Blackburn College also in Carlinville, where she studied accounting. She was united in marriage to Robert E. “Bob” French on Saturday, June 20, 1953, in the First Presbyterian Church of Carlinville, IL, and together they shared over 65 years of marriage until his death on Saturday, December 1, 2018. After her marriage she remained at home, seeing to the needs of her family, being involved in her 4 children’s lives and many activities and managing her home. Carol was of the Christian faith and often attended at the First Christian Church. She also was involved in the past with the Newcomers Club of Herrin, IL, and the Ladies Red Hat Society of DuQuoin, IL. In her spare time she enjoyed shopping, bowling and was an avid reader and collector of dolls especially “Precious Moments Figurines.” She also was a sports enthusiast and enjoyed watching all types of sports, especially “Cardinal Baseball.” Her family was a very important part of her life, especially her grandchildren and great grandchildren. She was always interested in hearing about all of the many different activities going on in their lives. She loved the times they all gathered and treasured the many memories created. Those she leaves behind will now treasure the many memories that were created. She is survived by three sons and daughters-in-law, Mike and Ruth French of Pawnee, IL, Patrick and Kathie French of Wichita, KS and Dennis and Ginger French of Paris, TN; daughter and son-in-law, Jennifer and Adam Porter of Christopher, IL; ten grandchildren, Ian French of Brookings, SD, Bennett French of St. Louis, MO, Madeline French of Wichita, KS, James French of Wichita, KS, Mikell Etherton of Springfield, IL, Aiden Porter of Christopher, IL, Kelsey Bethune and her husband, Shannon of Paris, TN, Todd French of Plainfield, IL, Kellie Knox and husband, Rusty of North Aurora, IL and Mike Kampenga and wife, Sandy of New Lenox, IL; thirteen great grandchildren, Garrett Withner, Alex French, Bar Bethune, Sloane Bethune, Cameron Smith, Sammie Smith, Tucker Knox, Kendall Knox, Gunner Knox, Katie Kampenga, Sarah Kampenga, Rachel Kampenga and Alena Fisher; her longtime companion, Ducky, age 10 who is a Black Lab mix, other extended family and many friends. She was preceded in death by her parents, husband and sister, Margaret Poole. Arrangements have been entrusted to Wilson-McReynolds Funeral Home, 900 North Court Street, Marion. A time of visitation will be on Saturday, March 13, 2021, from 3:00 p.m. to 5:00 p.m. at the funeral home. The family has requested or those who prefer, memorial contributions may be made to "Perry County Humane Society." Memorial contributions may be mailed in care of Wilson-McReynolds Funeral Home, 900 N. Court Street, Marion, IL, 62959. Memorial envelopes will be available at the funeral home. For additional information, call the funeral home, at 618-993-2131. DUE TO HEALTH CONCERNS RELATED TO THE COVID-19 VIRUS AND BY THE SIGNING OF EXECUTIVE ORDER BY THE ILLINOIS GOVERNOR, if you are planning on attending the visitation it is required you wear a mask and social distance yourself from others.

The family of Carol Camille French created this Life Tributes page to make it easy to share your memories.

Send flowers to the French family.