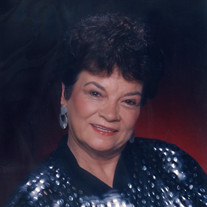 Carol L. Johns, age 82, of Marion, IL passed away at 1:52 a.m. on Wednesday, December 9, 2015, in Parkway Manor of Marion, IL. She was born in Anna, IL of Union County on Saturday, November 4, 1933, the daughter of William Riley and Almeda Beatrice (Allen) Dalton. Carol was united in marriage to Marion W. Johns on Sunday, May 7, 1950, in Piggott, AR and together they have shared over 65 years of marriage. Carol’s working career has been in nursing all of her lifetime. She received her Licensed Practical Nursing Degree from John A. Logan College of Carterville, IL and continued on and later received her Registered Nursing Degree at Southern Illinois University Edwardsville School of Nursing of Edwardsville, IL. During her career she has worked at many of the area health care facilities including; Marion Memorial Hospital, Herrin Hospital, and Carbondale Memorial Hospital. She also served as Director of Nursing at the Mattingly Health Care Center of Herrin, IL. Later she started teaching the Certified Nursing Assistant Program at John A. Logan College for about 10 years and also taught the Certified Nursing Assistant Program for Liberty Health Care of Marion for another 10 years until her retirement. She was a member of St. Joseph Catholic Church of Marion. In her spare time she enjoyed volunteering for many of the areas organizations and social events. She always enjoyed being active and served with the Coast Guard Auxiliary going to schools and events presenting different types of programs including swimming and boating. The energy she had and gave to others and the smile she gave to whom she was with will now be cherished by those she leaves behind. Carol is survived by her husband, Marion W. Johns of Marion; two sons and daughter-in-law, Wesley L. and Theresa Johns and Allen D. Johns all of Marion; two grandchildren, Wesley E. Johns and wife Courtney of Crab Orchard, IL and Melissa J. Johns of Marion; three great granddaughters, Kelly, Ashley and Riley Johns; great-great grandson, Nash; brother and sister-in-law, Billie D. and Wanda Dalton of Marion; sister, Geraldine Bloodworth of Marion; brother-in-law, Tommy Johns of Troy, IL; sister-in-law, Katherine Wall of Arlington, TX, other extended family and many friends. She was preceded in death by her parents. Arrangements for Carol L. Johns were entrusted to Wilson-McReynolds Funeral Home, 900 N. Court St., Marion, IL. The visitation was from 12:00 noon until 2:30 p.m. on Friday, December 11, 2015, at the funeral home. During the time of visitation a “Reflection of Life” DVD Tribute featuring special people places and events in Carol’s life was presented to the family and friends. Following the time of visitation the funeral service was at 2:30 p.m. with Father Richard G. Mohr presiding. The prelude and postlude musical selections were presented by pianist, Lori Creamer. Special musical selections presented during the service were “Ave Maria” and “On Eagle’s Wings” both as vocal selections by Lori Creamer who accompanied herself on the piano and “Jesu Joy of Man’s Desiring” as an instrumental piano selection by Lori Creamer. Interment followed in County Line Cemetery near Creal Springs, IL. Pallbearers were David Fisher, David Bloodworth, Gary Foster, Josh Foster, Larry Falaster and Jeremy Hentz. After the committal service at the cemetery the family and friends gathered at Carol’s son’s home, Wesley for a meal and continued time of fellowship and support. For those who preferred, memorial contributions were made to the “County Line Cemetery” and mailed in care of Wilson-McReynolds Funeral Home, P.O. Box 370, Marion, IL 62959. Memorial envelopes were available at the funeral home. For additional information please contact the funeral home by calling 618-993-2131.

Carol L. Johns, age 82, of Marion, IL passed away at 1:52 a.m. on Wednesday, December 9, 2015, in Parkway Manor of Marion, IL. She was born in Anna, IL of Union County on Saturday, November 4, 1933, the daughter of William Riley and Almeda Beatrice... View Obituary & Service Information

The family of Carol Lee Johns created this Life Tributes page to make it easy to share your memories.

Send flowers to the Johns family.