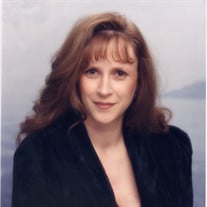 Carol S. Little, age 52, of Carterville and formerly of Marion, IL passed away at 2:45 a.m. on Thursday, August 14, 2014, at her home. She was born in Chicago, IL, on Saturday, December 2, 1961, the daughter of Walter E. and Dorothy F. (LaBotte) Blumenstock, Jr. Carol grew up in Marion and was a graduate of Marion High School and a member of Second Baptist Church of Marion. For many years Carol was employed by Wolohan Lumber Company of Marion and for the last seventeen years worked as a clerk for the Carterville Post Office. She liked to keep busy and in her spare time enjoyed riding her Honda Motorcycle. She also was a former member and secretary of the Road Runners Motorcycle Club of Southern Illinois. She enjoyed the company of her family, friends and her pet, Kyrie who she called her “Baby”. She is survived by her partner, Scott Shannon of Carterville, IL; daughter, Crystal McCrady of Kenosha, WI; son, Aaron Little of Carterville, IL; sister and brother-in-law, Deborah and Terry Odum of Marion, IL; two brothers, Charles Blumenstock and special friend, Belinda Taylor of Vienna, IL and Joe Blumenstock and his wife, Erica of Nashville, IL, eight nieces and nephews, one great niece, several aunts and uncles, other family members and many friends. She was preceded in death by her parents. Arrangements for Carol S. Little were entrusted to Wilson-McReynolds Funeral Home, 900 N. Court St., Marion, IL. A “Celebration of Life Gathering” for family and friends was on Saturday, August 16th from 3:00 p.m. until 5:00 p.m. at Wilson-McReynolds Funeral Home in Marion, IL. The family requested in lieu of flowers memorial gifts in memory of Carol S. Little be made to “Hospice of Southern Illinois”. Memorial contribution envelopes were available at the funeral home or were mailed in care of Wilson-McReynolds Funeral Home, P.O. Box 370, Marion, IL 62959. For additional information please contact the funeral home by calling 618-993-2131.

The family of Carol Sue Little created this Life Tributes page to make it easy to share your memories.

Carol S. Little, age 52, of Carterville and formerly of Marion,...

Send flowers to the Little family.