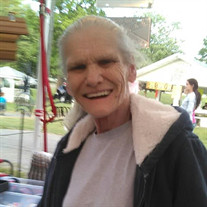 Carolyn Ann Bush, age 66, of Marion, IL, passed away peacefully with her family by her side, at 4:45 a.m. on Monday, March 25, 2019, at her home. She was born on Monday, January 12, 1953, in San Antonio, TX, the daughter of Neil Duane and Eva Lee (Sinks) Knight. Carolyn was united in marriage to Gary W. Bush on Tuesday, March 17, 1970, in Herrin, IL. Her working career, earlier in her lifetime was in factory work and waitressing. Later her working career was in housekeeping in hotel hospitality until her retirement in November of 2015. Carolyn was an avid reader in her spare time. Her favorite author was Agatha Christie and had read every book she had written. She also enjoyed watching murder mystery movies and crocheting. She loved her family and friends and was always interested in all of their many activities. The many memories created will now be cherished by those who knew and loved her. She is survived by her husband, Gary W. Bush of Las Vegas, NV; two daughters and one son-in-law, Tracy Ann Wade of Marion and Shelly Diane and Scott Carleo of Las Vegas, NV; son, Keith Wayne Bush of Benton, IL; eight grandchildren, Rita Serna and Robert Hendricks both of Marion, Russell Hendricks and his wife Michelle of Harrisburg, IL, Zackary Schneider and Jeffery Schneider both of Las Vegas, NV, Scott Dillon Bush of Benton, IL, David Laue of Marion and Heather Adams of Kentucky; six great grandchildren, Matthus Hendricks, Syllus Serna, Corrina Serna and Luis Serna all of Marion, Cain Hendricks of Harrisburg, IL and Liam Bush of Benton, IL; three brothers and one sister-in-law, Duane Knight of Marion, Darrell Knight of Creal Springs, IL and Larry and Crystal Knight of Herrin, IL; two sisters and brothers-in-law, Lola and Robert Wolaver of Whiteash, IL and Diane and Michael Simmons of Creal Springs, IL, other extended family members, and many friends. She was preceded in death by her parents; granddaughter, Robin Knight in 1993, and brother, Jerry Knight. Arrangements were entrusted to Wilson-McReynolds Funeral Home, 900 N. Court St., Marion. The visitation was from 11:00 a.m. until 1:00 p.m. on Thursday, March 28th, at the funeral home. During the time of visitation a “Reflection of Life” DVD Memorial Tribute featuring special people and events in Carolyn’s life was presented to the family and friends. Following the time of visitation the funeral service was at 1:00 p.m. with Rev. Keith Owens presiding along with a touching Eulogy presented by her two daughters, Tracy Wade, Diane Carleo and granddaughter, Rita Serna. Special recorded vocal musical selections presented at the beginning of the service were “Sitting On The Dock Of The Bay” by Otis Redding and “Drink A Beer” by Luke Bryan. Special recorded vocal musical selections presented during the service were “Holes In The Floor Of Heaven” by Steve Wariner, “In Color” by Jamey Johnson and “When I’m Gone” by Joey and Rory. Interment followed in Webb Cemetery near Tunnel Hill, IL. Pallbearers were Rita Serna, Russell Hendricks, Duane Knight, Larry Knight, Robert Hendricks and David Laue with Darrell Knight as an honorary pall bearer. At the graveside a special recorded musical selection “Go Rest High on That Mountain” by Vince Gill was presented and a special toast with Apple Crown Royal was presented by many attending to Carolyn. Following the committal service the family and friends gathered at Ray Fosse Park in Marion for a meal and continued time of fellowship and support. For those who preferred, memorial contributions were made to “The Ronald McDonald House” and mailed in care of Wilson-McReynolds Funeral Home, 900 N. Court Street, Marion, IL 62959. Memorial envelopes were available at the funeral home. For more information call the funeral home at 618-993-2131.

The family of Carolyn Ann Bush created this Life Tributes page to make it easy to share your memories.

Send flowers to the Bush family.