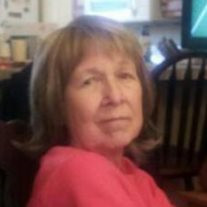 Carolyn J. Moake, age 76, of Marion, IL, passed away peacefully with her family at her side at 11:15 a.m., on Tuesday, March 4, 2014, at home. She was born on Friday, May 14, 1937, in Marion, IL the daughter of Hubert and Georgia Olean (Batts) Hester. Carolyn was united in marriage to William “Bill” Moake on Tuesday, February 24, 1953, in Marion, IL and together they have shared over sixty years of marriage. She was a lifelong resident of Marion, IL and was a member of and attended Community Chapel Church of Marion, IL. Carolyn was a good cook and owned and operated the Southern Cafe on South Court St. in Marion for four years from 1988 until 1991, she always enjoyed cooking for her family and preferred eating at home. In addition to caring for the needs of her family and her home she was an avid reader and loved to write novels and books of poetry. She also enjoyed scrapbooking, oil painting, playing bingo at the K. C. Hall and planting her garden. Carolyn had many interests and the most important part of her life was her family. She enjoyed the times they shared together and especially spending time with her grandchildren. She is survived by her husband, Bill Moake of Marion, IL; two sons and daughters-in-law, Bill and Brenda Moake of Taylorville, IL and Eddie and Trish Moake of Marion, IL; four grandchildren, Stephanie Grant of Pana, IL, Staci French and husband, Mark of Taylorville, IL, Jennifer Head and husband, Bryan of Shawneetown, IL and Sarah Moake of Marion, IL; four great grandchildren, Brett French, Eric French, Kaitlin Grant and Amaya Pierce; sister and brother-in-law, Dorothy and Ron Nalley of Clinton, OK; brother and sister-in-law, William Earl and Dorothy Hester of Great Mills, MD, friend and honorary sister, Doris Miller and husband, Bill of Vienna, IL; special friends and adopted grandchildren, Ashley and Gabe Stevens, other extended family and many other friends. She was preceded in death by her parents and brother, Hubert Hester, Jr. Arrangements for Carolyn J. Moake were entrusted to the Wilson-McReynolds Funeral Home, 900 N. Court Street, of Marion, IL. The time of the visitation was between the hours of 11:00 a.m. and 1:00 p.m. on Friday, March 7, 2014, at Wilson-McReynolds Funeral Home. Following the time of visitation the funeral service was at 1:00 p.m., with Rev. Jerry Schell presiding. The prelude and postlude musical selections were recorded piano selections. Special recorded vocal musical selections presented during the service were “The Lighthouse” by The Happy Goodmans and “Go Rest High On That Mountain” by Vince Gill. Interment followed in Cana Cemetery located north of Goreville, IL. Pallbearers were Brett French, Eric French, Mark French, Bryan Head, Zach Kwasniewski and Bobby Joe Rath. For those who preferred, memorial contributions were made to “Hospice of Southern Illinois”. Memorial contribution envelopes were available at the funeral home or were mailed in care of Wilson-McReynolds Funeral Home, P.O. Box 370, Marion, IL 62959. For additional information please contact the funeral home by calling 618-993-2131.

The family of Carolyn J. Moake created this Life Tributes page to make it easy to share your memories.