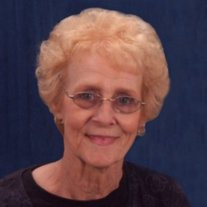 Sue (Anderson) Williams, age 73, of West Frankfort, IL, passed away peacefully at 3:40 p.m., on Saturday, June 8, 2013, in Shawnee Christian Care Center of Herrin, IL. She was born on Wednesday, October 18, 1939, in West Frankfort, IL the daughter of Orville A. and Hettie (Smothers) Anderson. Earlier in her lifetime she attended The Height’s Church of God in West Frankfort, IL. Her working career was as a nurse’s aid at Marion Memorial Hospital for many years. She was united in marriage to Raymond J. Williams on Saturday, June 20, 1987, in Joliet, IL and together they have shared nearly twenty-six years of marriage. Sue was a caring person and was loved by all who knew her. She is survived by her husband, Raymond J. Williams of West Frankfort, IL; three children, Bryan, Lonna and Mark, several grandchildren and great grandchildren; three sisters and brothers-in-law, Barbara and Louis Ottolini of Herrin, IL, Linda and Cliff Norman of West Frankfort, IL and Billie and Norman “Rounder” Ray of West Frankfort, IL; brother, Greg Smith of West Frankfort, IL; two brothers-in-law, Ray Stipes of St. Charles, MO and Virgil Russell of West Frankfort, IL, other extended family and many friends. She was preceded in death by her parents and two sisters, Norma Stipes and Jerry Lynn Russell. Arrangements for Sue (Anderson) Williams have been entrusted to Wilson-McReynolds Funeral Home, 900 N. Court St., Marion, IL. In accordance with her wishes cremation will take place and there will not be any visitation or services scheduled at this time. For those who prefer, memorial contributions may be made to “American Diabetes Association”, “American Heart Association”, “Hospice of Southern Illinois” or “St. Jude Children’s Hospital”. Memorials may be mailed in care of Wilson-McReynolds Funeral Home, P.O. Box 370, Marion, IL, 62959. For additional information please contact the funeral home by calling 618-993-2131.

The family of Carolyn Sue Williams created this Life Tributes page to make it easy to share your memories.

Send flowers to the Williams family.