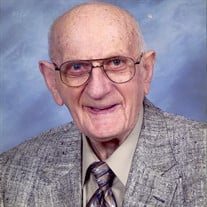 Carson Caraway, age 95, of Marion, IL, passed away peacefully at 11:34 p.m. on Friday, November 16, 2018 in Liberty House, his home for the past 30 years in Marion, IL. He was born on Saturday, May 12, 1923 in rural Marion, in Williamson County, IL the son of John and Flossie (Franklin) Caraway, Carson was of the protestant faith and for many years attended Second Baptist of Marion until he was physically unable to attend. Although Carson was never able to work he was always willing to do what he could. In his early years he did odd jobs for Pulley’s Bar-B-Que and later was befriended by the Marion Police and Fire Departments. He was always willing donate his time to run errands or do what he could for both departments and for his friends. At Christmas time there were always bills of different denominations pinned to the Christmas Tree for Carson from the department employees and others in the community who knew Carson. He always felt blessed by his friends. He is survived by his two nieces, Marilyn Orso of Herrin, IL and Shirley Harvel of Energy, IL; two great nieces, Ivana Swan of Herrin, IL and Donna Ernsting Sharpe and husband, Robert of Memphis, TN; one great nephew, Jason Ernsting and wife, Johanna Doty of Spokane, WA; one great-great niece, Ellie Palmer of Memphis, TN; his special family, the staff and residents of Liberty House of Marion; other family members, and many friends at the Marion Police and Fire Departments. He was preceded in death by his parents; twin sisters, Vivian Edmonds and Lillian Barr, and brother, Bobby Baker. Arrangements have been entrusted to Wilson-McReynolds Funeral Home, 900 North Court Street, Marion, IL. There will be a memorial service will be at 3:30 p.m., Tuesday, November 27, 2018 at the Liberty House of Marion with Rev. Kevin Waldrup presiding. For those who prefer, memorial contributions may be made to “Liberty House” of Marion and mailed in care of Wilson-McReynolds Funeral Home, 900 N. Court Street, Marion, IL 62959. For more information please call the funeral home at 618-993-2131.

The family of Carson Caraway created this Life Tributes page to make it easy to share your memories.

Send flowers to the Caraway family.