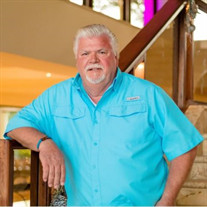 Charles Michael “Chuck” Yadloski, age 64, of Herrin, IL, passed away at 11:38 a.m. on Tuesday, September 22, 2020, in Memorial Hospital of Carbondale, IL. He was born on Wednesday, March 28, 1956, in Christopher, IL, the son of William “Bill” and Doris (Hargraves) Yadloski. Chuck attended school in Christopher and was a graduate of Christopher High School Class of 1973. He continued with his education by attending at Rend Lake College of Ina, IL. He was first united in marriage to Patricia “Patti” Newcomb on Saturday, August 9, 1975, in Benton, IL, and this marriage was blessed with 2 children; Shawn and Trisha. He later was united in marriage to Cheryl Ann Harnden on Saturday, September 3, 2005, in Okoboji, IA, and together they have shared over 15 years of marriage. During his high school years, he worked at the “Maid Rite” in Christopher. After graduation from Rend Lake College he worked for Hobbs & Son John Deere of Benton. He then decided to follow in his father’s footsteps in coal mining by starting his 10 year mining career working at the “Captain Coal Mine” and the “Horse Creek Coal Mine” both of Perry County. He later began working with Henkels & McCoy of Salem, IL. He continued to advance his career, working with several companies including; FS of Benton, Ag-Chem Equipment Corporation of Bloomington, IL, in 2002 moved to Jackson, MN , working for AGCO. He moved back to Southern Illinois in 2012, working for Altorfer CAT, in 2015 he began working for Parks Industries of Marion and then on February 13, 2017, became the location manager for Southern FS of Eldorado, IL, a position he held at this time. Chuck was a member of Abundant Life Assembly of God Church of Marion, where he played drums in the “Worship Team”. During his high school years he played drums in a band called the “Polka Dots” with his sister who was also in the band. In his spare time he enjoyed; fishing, riding motorcycles, camping in his motor home, cooking, dancing, listening to music, enjoyed guns and shooting. He also was a great listener and gave a lot of advice to those who sought him out. Chuck spoke often about looking forward to taking his grandsons fishing, but he was called to Heaven too soon. He loved his family fiercely and always enjoyed the many times they spent together. The many memories that were created will always be cherished by those he leaves behind. Chuck is survived by his wife, Cheryl A. Yadloski of Herrin; his son, Shawn (Shauna) Yadloski of Vienna, IL; daughter, Trisha Robertson of Benton, IL; grandchildren, Gracelyn Yadloski and Griffin Yadloski of Vienna, IL, Carly Robertson, Kayla Robertson, Kamryn Robertson and Colton Robertson all of Benton, IL; sisters Kathy (Chris) Ahrendt of Goreville, IL, Sue (Dave) Andress of Kansas City, MO, Lori (Roger) Gant of Mulkeytown, IL; brothers-in-law John Shukites of Christopher, IL and Steve (Sherry) Harnden of Jackson, MN; sister-in-law Elayne (Neil) Rothbarth of Worthington, MN, several nieces and nephews, other extended family and many friends. He was preceded in death by his parents and one sister, Judith “Judi” Shukites of Christopher, IL. Arrangements were entrusted to Wilson-McReynolds Funeral Home, 900 N. Court St., Marion, IL. The visitation was from 5:00 p.m. until 7:00 p.m. on Friday, September 25th at the funeral home. During the time of visitation a “Reflection of Life” DVD Memorial Tribute featuring special people, places and events in Chuck’s life was presented to the family and friends. The visitation resumed from 11:00 am. to 1:00 p.m. on Saturday, September 26, 2020, at Abundant Life Assembly of God Church, located at 1409 East DeYoung Street of Marion. Following the time of visitation, a Celebration of Life service was held at 1:00 p.m. with Pastor Jimmy Russell presiding. Personal comments and prayer was presented by Pastor Deon Dutton. The prelude and postlude musical selections were presented by pianist, Loretta Bruno. Special recorded musical selections presented during the service were “Dancing With the Angels” by Monk & Neagle and “Cover Me” by Mark Condon. The service concluded with the Abundant Life Praise Team singing “What a Day That Will Be”. Pallbearers were Gary Parks, Justin King, Chris Taylor, Dave Andress, Eric Dirnbeck and Dean Southerd. Following the service the family and friends gathered for a meal and fellowship in the church fellowship center. For those who preferred, memorial contributions were made to Chuck’s family c/o “Cheryl Yadloski” to help with Chuck’s medical expenses. Memorial contributions were mailed in care of Wilson-McReynolds Funeral Home, 900 N. Court Street, Marion, IL 62959. Memorial contribution envelopes were also available at the funeral home and the church. For additional information call the funeral home at 618-993-2131.

The family of Charles Michael "Chuck" Yadloski created this Life Tributes page to make it easy to share your memories.