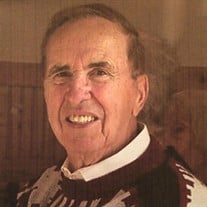 Charles Edward Mahalick, age 94, of Marion, IL, passed away at 9:15 p.m. on Sunday, March 1, 2015, in Memorial Hospital of Carbondale, IL. He was born in West Frankfort, IL on Wednesday, June 23, 1920, the son of John H. and Mary A. (Sandrock) Mahalick. He attended school in West Frankfort and was a graduate of West Frankfort High School in 1939. Charles enrolled into the Civilian Conservation Corps, at the age of nineteen on April 11, 1940, and served until he was honorably discharged on July, 19, 1941. He again answered the call of this nation on October 26, 1942, by serving in the United States Army in Company B 44th Tank Battalion during the time of WW II in the Asiatic Pacific Theater being stationed in New Guinea and the Philippines. After his period of faithful service he was honorably discharged on November 5, 1945, with the rank of Technician Fifth Grade. Charles was united in marriage to Carol Bury on Sunday, July 6, 1947, in Chicago, IL and together they have enjoyed over sixty-seven years of marriage. His working career was with the Wm. Wrigley Jr. Company of Chicago, IL as a welder for thirty-five years until his retirement. After his retirement he moved to Herrin, IL and later to Marion. He is a member of St. Joseph Catholic Church of Marion, IL and also a member of American Legion Post No. 1961 of Orient, IL. In his spare time he enjoyed hunting and fishing, making jewelry, dancing and was known as a cartoonist artist. His family was a very important part of his life and the many memories that have been created will now be cherished by those left behind. He is survived by his wife, Carol Mahalick of Marion, IL; three nieces, Barbara Reimbold and her husband, Ed of Dunwoody, GA, Stephanie Koller and her husband, Robert of Arlington Heights, IL, and Dorothy Polzin and her husband, James of Downers Grove, IL, two great nieces, two great nephews, four great-great nieces and two great-great nephews, other extended family and many friends. He was preceded in death by his parents and brother, John. Arrangements for Charles Edward Mahalick were entrusted to Wilson-McReynolds Funeral Home, 900 N. Court St., Marion, IL. The time of the visitation for family and friends was from 10:00 a.m. to 11:00 a.m. on Thursday, March 5, 2015, at the funeral home. Following the time of visitation the funeral service was at 11:00 a.m. with Rev. Monsignor Thomas Flach presiding. The prelude and postlude musical selections were presented by pianist, Lori Creamer. Special instrumental musical selection presented during the service was “Ava Maria” by pianist, Lori Creamer. Military honors were accorded at the funeral home by Orient, IL American Legion Post No. 1961 member, Howard Johnson and the Marion, IL Illinois Army National Guard Funeral Honors Burial Detail members, SPC Justin Sheffler and SPC William Ott. During the folding of the flag the recorded instrumental musical selection, “America, The Beautiful” was presented. Presentation of the folded flag to Charles’ wife, Carol was by SPC Justin Sheffler. Interment was at a later date in Resurrection Cemetery in Justice, IL. For those who preferred, memorial contributions were made to the “American Legion Post No. 1961 of Orient, IL” and mailed in care of Wilson-McReynolds Funeral Home, P.O. Box 370, Marion, IL 62959. Memorial envelopes were available at the funeral home. For additional information please contact the funeral home by calling 618-993-2131.

The family of Charles Edward Mahalick created this Life Tributes page to make it easy to share your memories.

Charles Edward Mahalick, age 94, of Marion, IL, passed away at...

Send flowers to the Mahalick family.