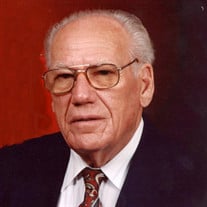 Charles M. Moore, age 90, of Marion, IL, passed away on Tuesday, February 16, 2021, at 8: 53 a.m. at Heartland Regional Medical Center of Marion. He was born on Thursday, January 1, 1931, in Marion, IL, the son of Bert and Della (Butts) Moore. Charles was united in marriage to Lorene Hudgens on Friday, January 29, 1954, in Marion and together they shared over 65 years of marriage until her death on June 4, 2019. This union was blessed with their daughter, Linda, and son, Randy. He answered the call of this nation and enlisted into the United States Army in 1948, the beginning of his long period of serving for the next 43 years. His working career was with Central Illinois Public Service of Marion where he was employed for over 35 years. Charles was a member of Second Baptist Church of Marion for many years. He was also a former member of Fellowship Lodge #89 A.F. & A.M. of Marion, IL. In his spare time he loved landscaping and had his own business. He also enjoyed traveling to Florida, and his dream was to eventually retire there. The many memories created will now be cherished by those he leaves behind. He is survived by his daughter and son-in-law, Linda L. and Gordon Fowler of Marion; son and daughter-in-law, Charles “Randy” and Tammy Moore of Spokane Valley, WA; four grandchildren, Amanda Fowler-Test and husband Todd of Goreville, IL, Randi Lynn Jensen and husband Will of Lake Stevens, WA, Kristen Moore of Spokane Valley, WA and Justin Moore and wife Taylor of Richmond, UT; four great grandchildren, Madilyn, Owen, Elliott and Henry Jensen all of Snohomish, WA; other extended family and many friends. He was preceded in death by his parents; sisters, Edith Parks, Katherine Herren, Evelyn Singleton, Maxine Burgess, and Verda Mae Moore. Arrangements have been entrusted to Wilson-McReynolds Funeral Home, 900 N. Court St., Marion. The visitation will be on Monday, February 22, 2021, from 10:00 a.m. to 10:45 a.m. at the funeral home. Following the time of visitation the funeral service will be at 10:45 a.m. with Danny Ward presiding. Interment will follow next to his wife in Mound City National Cemetery in Mound City, IL. Military honors will be accorded at the graveside by the Veteran Members of the American Legion Post #178 and the Illinois Army National Guard Funeral Honors Burial Detail. In lieu of flowers the family asked that memorial contributions may be made to the “VFW Honor Guard”, “USO” and/or “Mound City National Cemetery Preservation Commission”. Memorial contributions may be mailed in care of Wilson-McReynolds Funeral Home, 900 N. Court Street, Marion, IL 62959. Memorial envelopes will also be available at the funeral home. For additional information call the funeral home at 618-993-2131.

The family of Charles Monroe Moore created this Life Tributes page to make it easy to share your memories.

Send flowers to the Moore family.