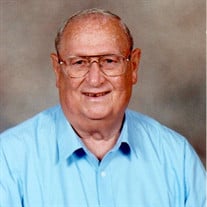 Dale Murphy, age 86, of Marion, IL, passed away peacefully surrounded by his family, at 8:10 p.m. on Wednesday, October 30, 2019, at his home. He was born on Friday, April 7, 1933, in Pittsburg, IL, the son of Henry Troy and Gazelle (Parks) Murphy. Dale was united in marriage to Evelyn Joyce Owens on Saturday, April 26, 1952, in Valparaiso, IN and together they shared nearly 52 years of marriage until her death on Tuesday, February 18, 2003. His working career began in the Detroit, MI area for a short time. He then moved back to Valparaiso and began working in a factory on second shift and during the day he worked for a nursery. Then in 1968, he moved his family to Marion and he began working for Dura-Container in Herrin, IL as a fork lift operator and remained there until his health forced him to retire. He was a member of Bethel Missionary Baptist Church of the Poordo-Angelville area where he and his wife regularly attended. Earlier in his lifetime he loved playing baseball. In his spare time he enjoyed woodworking creating unique items that could be used around the home and building log cabins for all of his grandchildren. He also was an excellent cook, loved fishing and was always heard singing while working. He also enjoyed remodeling houses and helped his three sons build and remodel their homes. Though he always kept busy, his family was a very important part of his life. He was always interested in all of their many activities, especially those of his grandchildren and great grandchildren. The many memories that have been created will be cherished by those he leaves behind. He is survived by his daughter and son-n-law, Renee and Dennis Midgett of Marion; two sons and daughter-in-law, Wayne Murphy and his companion Paula of Marion and Wade and Charla Murphy of Taylorville, IL; ten grandchildren, Tiffany Hilliard and her husband Cory of Marion, Stephanie McCaleb and her husband Matt of Marion, Carl Midgett and his wife Jayme of Marion, Megan Baker and her husband Chad of Marion, Bruce Murphy and his wife Julie of Union City, TN, Amanda Andress and her husband Gary of Marion, Sarah Murphy of Whiteash, IL, Michael Murphy and his wife Lori of Marion, Lacee Johnson and her husband Evan of Scottsdale, AZ and Denver Murphy and his wife Mallory who are stationed in Germany in the military; twenty one great grandchildren, Lia, Derik, Olivia, Easton, Noah, Haylee, McKenna, Keegan, Carleigh Jo, Coy, John, Marie Renee, Rowdy, Hunter, Parker, Gabe, Wade, Charlie, Dylon, Jackson, Molly and one on the way; sister and brother-in-law, Shirley and Kenneth Kelton of Marion; special nephew, Troy Murphy of Johnston City, IL, a host of other extended family and many friends. He was preceded in death by his parents, wife; son, Jerry Allen Murphy on June 16, 2017; two sisters, Mabel Powell and Sue Summers and five brothers, Glen, James, Jessie, Bill and Bob Murphy. Arrangements have been entrusted to Wilson-McReynolds Funeral Home, 900 N. Court St., Marion. The visitation will be from 10:00 a.m. to 12:00 p.m. on Saturday, November 2, 2019, at the funeral home. Following the time of visitation, the funeral service will be at 12:00 p.m. with Pastor Gaylon Parks presiding. Interment will follow next to his wife in Mount Pleasant Poordo Cemetery located northeast of Marion. For those who prefer, memorial contributions may be made to “Hospice of Southern Illinois” and mailed in care of Wilson-McReynolds Funeral Home, 900 N. Court Street, Marion, IL 62959. Memorial envelopes will be available at the funeral home. For additional information call the funeral home at 618-993-2131.

The family of Charles Dale Murphy created this Life Tributes page to make it easy to share your memories.

Send flowers to the Murphy family.