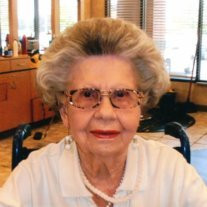 Clara “Rusty” Brandt Phillips, age 97, of Springfield, MO, formerly a long-time resident of Marion, IL, passed away peacefully at 2:48 a.m., on Thursday, December 5, 2013, in Brookhaven Health and Rehabilitation in Springfield, MO. She was born on Thursday, November 2, 1916, in Galatia, IL, the daughter of Charles and Myrtle (Malone) Maple. Clara was united in marriage to Lester Brandt in West Frankfort, IL in 1944, and together they shared twenty-five years of marriage until his death came on September 20, 1969. While living in Marion she was a member of the First United Methodist Church, Beta Sigma Phi, Preceptor Omicron Chapter Sorority, Franklin County Country Club and a past president and member of the Marion Memorial Women’s Hospital Auxiliary. Rusty also served and participated in numerous charitable and philanthropic organizations. She is survived by her daughter Martha Brandt of Englewood, CO; son and daughter-in-law Chuck and Sheila Brandt of Springfield, MO; grandsons David Brandt and wife, Emily and Christopher Brandt all of Jackson, MS; two great grand-daughters, Stella and Lila, other extended family and many friends. She was preceded in death by her parents; first husband, Lester Brandt. Arrangements for Clara “Rusty” Brandt Phillips were entrusted to Wilson-McReynolds Funeral Home, 900 N. Court St., Marion, IL. The time of visitation was from 11:00 a.m. until 12:00 noon on Thursday, December 12, 2013, at Wilson-McReynolds Funeral Home in Marion, IL. Following the time of visitation the funeral service was at 12:00 noon with Pastor David Miller presenting special prayers; son, Chuck Brandt presenting comments of memory and the eulogy and grandson, David Brandt reading a special poem titled “Poem of Life”. Many of those attending the service presented comments of memory about “Rusty” during a special time of sharing. The prelude and postlude musical selections were recorded piano selections. Special recorded vocal selections presented during the service were “Blessed Assurance” and “I’ll Meet You In the Morning”. The service concluded with the recorded piano instrumental selection “Battle Hymn of the Republic”. Following the service the family and friends gathered at Bennie’s Italian Foods Restaurant in Marion, for a meal and continued time of fellowship and support. Private interment took place next to her husband, Lester on Friday, December 13, 2013, at 11:00 a.m. in Masonic & Odd Fellows Cemetery in Benton with Pastor David Miller presiding. For those who preferred, memorial contributions were made to “Brookhaven Health & Rehabilitation” of Springfield, MO. Memorial contribution envelopes were available at the funeral home or were mailed in care of Wilson-McReynolds Funeral Home, P.O. Box 370, Marion, IL, 62959. For additional information please contact the funeral home by calling 618-993-2131.

The family of Clara "Rusty" Brandt Phillips created this Life Tributes page to make it easy to share your memories.