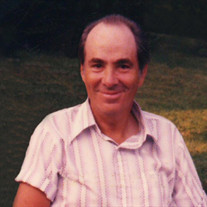 Jerome Richey, age 83, of rural Marion, IL passed away peacefully at 9:10 p.m. on Thursday, February 18, 2016, in the Veteran’s Community Living Center of Marion, IL. He was born on Tuesday, June 21, 1932, in Crab Orchard, IL the son of Albert Lincoln and Ora Mae (Miller) Richey. Jerome answered the call of this nation by serving in the United States Army during the time of the Korean War. After his period of faithful service he was honorably discharged with the rank of corporal. He never married and his working career was with the IGA Grocery in Marion all of his life time until his retirement. He attended church in the past at the Center Baptist Church of Crab Orchard and was a former member of the American Legion Post No. 147 of Marion. He is survived by good friends, Gloria and J.R. Sears of Marion. He was preceded in death by his parents and sister, Rosalie Richey. Arrangements for Jerome Richey were entrusted to Wilson-McReynolds Funeral Home, 900 N. Court St., Marion, IL. The graveside service was at 11:00 a.m. on Tuesday, February 23, 2016, in Rose Hill Cemetery in Marion, IL with J.R. Sears presiding. Special music presented at the graveside was “In the Garden” by Elvis Presley and “What a Day That Will Be” by Brian Free and Assurance. Military honors were accorded at the graveside by members of Heyde-Pillow V.F.W. Post No. 1301, American Legion Post No. 147 both of Marion and the Illinois National Guard Funeral Honors Burial Detail of Marion. Those participating were Commander, Larry Largent; Officer of the Day, Ernie Rinella; Chaplain, Ron Ganzer; Bugler, SPC Erik Clapper; Color Guard, Tim Payne and Jessie James; National Colors, Jeff Hoffard; VFW Post Colors, Bob Casey and Firing Squad, Don Burgrabe, Bill Hampsey, Fred Read, Ron Russell and Jerry Swisher. Members of the Illinois National Guard Funeral Honors Burial Detail participating in the folding of the flag were SPC William Ott and SPC Erik Clapper. Presentation of the flag to Gloria was by SPC William Ott. Interment followed next to his sister, Rosalie. Those attending the committal service gathered at the cemetery prior to 11:00 a.m. For additional information please call the funeral home at 618-993-2131.

The family of Clarence Jerome Richey created this Life Tributes page to make it easy to share your memories.