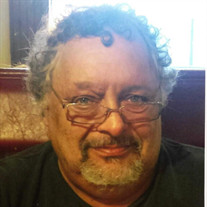 Claude Stephen “Steve” Duplessis, age 64, of Marion, IL, passed away peacefully with his family near, at 12:58 p.m. on Monday, April 19, 2021, at his home. Steve was born on Saturday, July 14, 1956, in Chicago, IL, the son of Joseph Lee and Velma Lois (Diamond) DuPlessis. His mother and the family moved to the Pittsburg, IL, area when Steve was age 9. He returned back to the Chicago area when he was age 15. At a young age he started working at Jewel-Osco Supermarket in Chicago for several years. Then in 1975, he answered the call of this nation by enlisting into the United States Navy and after his period of service was honorably discharged. After returning from the military, he began working for Creative Automation of Chicago, for several years. In his spare time, he enjoyed reading, watching Chicago Bears Football, was an avid Chicago White Sox fan and enjoyed being at home sitting outside on his front porch. He loved his family, especially his grandchildren and often was heard saying it was wonderful being a grandfather. He enjoyed the many family gatherings and was always interested in hearing about all of their many activities. The many memories created will now be cherished by those he leaves behind. He is survived by his son, Drew M. DuPlessis of Marion; three daughters, Stephanie L. DuPlessis and Gino DeMichael of Cicero, IL, Annie M. Riggs of Marion, and Desiree Andrzejewski of Johnston City, IL; thirteen grandchildren, Braydon, Todd, Angelo, Brayden, Drew, Tracy, Loralee, Natalee, Dylan, Sophia, Chris, John and Raelynn; sister, Donna Maska of Chicago, IL; two brothers, Gary Buttrum and his wife, Kathy of Florida, and Robbie DuPlessis of Indiana, other extended family and many friends. He was preceded in death by his parents; granddaughter, Elizabeth Riggs on September 3, 2020; sister, Lorena DuPlessis and brother, Chuck Curry Arrangements have been entrusted to Wilson-McReynolds Funeral Home, 900 North Court Street, Marion. The visitation will be on Sunday, April 25, 2021, from 11:00 a.m. to 1:00 p.m. at the funeral home. Following the visitation, the funeral service will be at 1:00 p.m. with Chaplain Andrew Hastie presiding. Interment will follow next to his grandmother, Inez Franklin in Union Grove Cemetery northeast of Pittsburg, IL. Military honors will be accorded at the graveside by the members of the Heyde-Pillow V.F.W. Post No. 1301 of Marion, and members of the United States Navy Funeral Honors Burial Detail at the cemetery. For those who prefer, memorial contributions may be made to “Wilson-McReynolds Funeral Home” to help with final expenses. Memorial contributions may be mailed in care of Wilson-McReynolds Funeral Home, 900 N. Court Street, Marion, IL 62959. Memorial envelopes will also be available at the funeral home. For additional information call the funeral home at 618-993-2131. DUE TO HEALTH CONCERNS RELATED TO THE COVID-19 VIRUS AND BY THE SIGNING OF EXECUTIVE ORDER BY THE ILLINOIS GOVERNOR, if you are planning on attending the visitation and service it is required you wear a mask and social distance yourself from others.

The family of Claude Stephen "Steve" DuPlessis created this Life Tributes page to make it easy to share your memories.