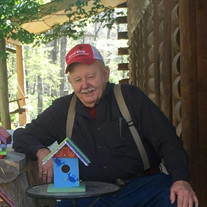 Cliff was born on January 5, 1937 in Shawnee OK. He was a loving father and a beloved grandfather. Cliff graduated from Fairfield HS and was a sergeant in the US Army Reserves. Following in his father's footsteps he was a member of the Fairfield Masonic Lodge #206 and a 32nd degree Mason. He is survived by his three children Cindy and her husband Mark Wright of Wildwood, MO, Steve and his wife Susan (Randall) Rumburg of Hereford, AZ and Jill and her husband Chris Estwing of Marion, IL, also his four grandchildren, Jonathan Estwing of Boston, MA, Adam Estwing of Marion, IL, Megan Wright of Washington D.C. and Austin Rumburg of Hereford, AZ. He was preceded in death by his parents, Clifford Harry Rumburg Sr. and Louise Snyder Rumburg of Fairfield, IL as well as his two sisters Wanda Joslin and Jeene Sefton. He was also survived by numerous nieces and nephews. Cliff loved his 47 years of work as a heavy equipment operator, with a specialty in operating "the big cranes". He was a member of The International Operating Engineers Local 841, a union man through and through. His work included refineries, pipelines, highways and bridges in the US and abroad. Through this work he fulfilled his dreams of traveling and working all around the world. He thoroughly enjoyed his retirement years. He discovered he had a passion and gift for woodworking, at which he truly excelled. He enjoyed making beautiful handcrafted furniture and items to share with loved ones and friends. He also found he had a talent for pool by playing in leagues with his daughter and dearly loved catching a big Bass or a mess of Bluegill. He was always making his friends, family and complete strangers laugh. The one trait that he felt ran through all aspects of life, and that he felt we all should have and use was “good common sense" and he taught us that laughter truly is medicine for the soul. Cliff died at his home in Marion, IL on December 9. He would have been 80 years young on January 5, 2017. Arrangements for Clifford H. Rumburg, Jr., have been entrusted to Wilson-McReynolds Funeral Home, 900 N. Court St., Marion, IL. Visitation will be held from 6:00-8:00PM Thursday, December 15 at the funeral home, and a private burial ceremony to follow. For additional information please contact the funeral home by calling 618-993-2131.

Cliff was born on January 5, 1937 in Shawnee OK. He was a loving father and a beloved grandfather. Cliff graduated from Fairfield HS and was a sergeant in the US Army Reserves. Following in his father's footsteps he was a member of the Fairfield... View Obituary & Service Information

The family of Clifford H. "Sonny" Rumburg Jr. created this Life Tributes page to make it easy to share your memories.

Send flowers to the Rumburg family.