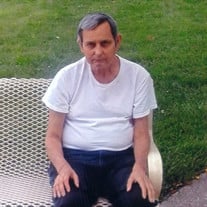 Clyde R. Allen, age 54, of Marion, IL, passed away at 3:30 p.m. on Wednesday, August 27, 2014, in St. Louis University Hospital in St. Louis, MO. Clyde was born on Monday, January 25, 1960, in Belleville, IL, the son of Cleveland E. and Thelma J. (Brown) Allen, Sr. He was a graduate of the Crab Orchard High School and was a member of the Galatia United Methodist Church. Clyde worked on the family farm and for other farmers in the rural areas Crab Orchard and Carrier Mills. He is survived by his five sisters and brothers-in-law, Jane and Gerald VanVleck of Marion, IL, Mary Moore of Zeigler, IL, Ada and Andy Travelstead of Marion, IL, Joyce and Richard Clarida of Carrier Mills, IL and Thelma and Troy Steele of Potosi, MO; two brothers and sisters-in-law, Steve and Diana Allen of Greenville, IL, and Raymond L. and Lisa Allen of Creal Springs, IL, several nieces, nephews, other extended family and many friends. He was preceded in death by his parents and brother, Cleveland E. Allen, Jr. Arrangements for Clyde R. Allen were entrusted to Wilson-McReynolds Funeral Home, 900 N. Court St., Marion, IL. The visitation for the family and friends was on Tuesday, September 2, 2014, from 11:00 a.m. to 1:00 p.m., at the funeral home. Following the time of visitation the funeral service was at 1:00 p.m. with Dr. Harrison “Bud” Payton presiding. The prelude and postlude musical selections were recorded piano selections. Special recorded vocal musical selections presented during the service were “I’ll Meet You In the Morning” by The Gaither Vocal Band, “Amazing Grace” by Elvis Presley and “Precious Memories” by Alan Jackson. Interment followed in the Maplewood Cemetery of Marion, IL. Pallbearers were Justin Altenberger, Andy Travelstead, Steve Allen, Raymond Allen, Troy Edmunds and Gerald VanVleck. After the committal service at the cemetery the family gathered at the Second Baptist Church in Herrin, IL for a meal and continued time of fellowship and support. For those who preferred, memorial contributions were made to Clyde’s family to help with expenses, c/o “Steve Allen”. Memorial contribution envelopes were available at the funeral home or were mailed in care of Wilson-McReynolds Funeral Home, P.O. Box 370, Marion, IL, 62959. For additional information please contact the funeral home by calling 618-993-2131.

The family of Clyde Ray Allen created this Life Tributes page to make it easy to share your memories.

Send flowers to the Allen family.