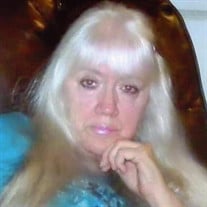 Connie B. Key, age 70, of rural Pittsburg, IL, passed away peacefully with her family near, at 2:17 a.m. on Sunday, October 11, 2020, at her home. She was born on Thursday, October 20, 1949, in Carbondale, IL, the daughter of Robert and Rosemary Bernice (Gibbons) Throgmorton. Connie was united in marriage to Frank I. Key on Friday, May 31, 1996, in McLeansboro, IL, and together they shared nearly 13 years of marriage until his death on Monday, May 25, 2009. She was a Christian and at the age of 15, Connie preached her first sermon at her father’s church in Whiteash, IL. She was first married at the age of 17, and her and her husband felt the calling to become Evangelists, traveling and preaching the Word of God, in tent revivals in many of the southern states. They eventually moved to Marion, IL, and felt led to open a church on Cherry Street in Marion, called “Deliverance Tabernacle”. Later in her life, at age 51, she began her ministry again and had churches in Christopher, IL, and Pittsburg, IL until she retired from being a pastor in 2012. Connie was a very talented person in many areas. She was a musician and enjoyed playing the guitar and wrote over 100 songs. She has written and had published many children’s books. She also bred and sold dogs and cats and specialized in Collies, Shih Tzu and Persian Cats. She loved the outdoors and everything God had created for her. She enjoyed working in her flowers, especially Lilacs and Iris’ and gardening. Later in her life as her health declined she found enjoyment spending time in the Word of God and playing the computer game “Fallout Shelter”. She is survived by two daughters, Lisa Stafford of Iuka, MS and LaBreeska Redmon of Pittsburg, IL; ten grandchildren, April Bommarito and husband, Joe of Lola, KY, Amber Rametta of Pittsburg, IL, Aaron Teal, David Tiernan and Abigail Tiernan all of Iuka, MS, Brittany Albright of Pittsburg, IL, Keith Redmon of McLeansboro, IL, Haley Redmon and Michael Redmon both of Pittsburg, IL, and Luke Redmon and wife, Autumn of Carterville, IL, nine great grandchildren; two sisters and brother-in-law, Carolyn and James Montgomery of Carbondale, Il and Wilhelma Crownover of WY; longtime best friend and caregiver, Tracey Gunter of Pittsburg, IL, other extended family and many friends. She was preceded in death by her parents, husband and two sisters, Patsy Alwa and Lillian Montgomery. Arrangements have been entrusted to Wilson-McReynolds Funeral Home, 900 N. Court St., Marion. The graveside committal service will be at 10:00 a.m. on Wednesday, October 14, 2020, in Union Grove Cemetery located northeast of Pittsburg, IL, near her home, with Connie’s daughter, Lisa presenting comments. DUE TO HEALTH CONCERNS RELATED TO THE COVID-19 VIRUS AND BY THE SIGNING OF EXECUTIVE ORDER BY THE ILLINOIS GOVERNOR, if you are planning on attending the graveside committal service it is REQUIRED you wear a mask and social distance yourself from others. For additional information call the funeral home at 618-993-2131.

The family of Connie Bernice Key created this Life Tributes page to make it easy to share your memories.

Send flowers to the Key family.