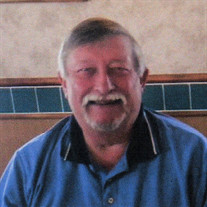 Dale W. “Squeak” Wilson, age 66, of Marion, IL passed away with his family at his side at 1:45 p.m., on Friday, October 3, 2014, in Herrin Hospital of Herrin, IL. He was born on Saturday, July 17, 1948, in Eldorado, IL the son of Leonard Dale “Lyndale” Wilson and Winifred J. “Winnie” (McConnell) Wilson. Squeak, as he was known by, attended school in Marion, IL and was a graduate of Marion High School in 1967. He answered the call of the nation by enlisting into the United States Navy during the time of the Vietnam War aboard the USS Samuel Gompers serving in the South Pacific. After his period of faithful service he was honorably discharged with the rank of Machinist’s Mate Third Class. Squeak was united in marriage to Patricia “Pat” Hensgen on Saturday, December 2, 1978, in Marion, IL and together they have shared nearly thirty-six years of marriage. His working career was with the United States Federal Penitentiary of Marion, IL for many years beginning as a guard and later working in the power house as a maintenance supervisor until his retirement. He was of the Protestant faith. Some of his other affiliations and memberships included; The Fraternal Order of the Eagle’s Aerie No. 2457, American Legion Post No. 147 and lifetime member of the Heyde-Pillow V.F.W. Post No. 1301 all of Marion, IL. He proudly served on the V.F.W. Funeral Honors Ritual Team for many years. In his spare time he enjoyed being Santa Claus at the Eagle’s Club every year, spending time in his “Man Cave” at home watching NASCAR, St. Louis Rams Football and St. Louis Cardinal Baseball. He also looked forward twice a year, in May and October, when all his cousins, uncles, other extended family and friends would gather at “Fish Camp” on the Ohio River south of Golconda, IL. His family was a very important part of his life, especially his grandchildren. In February of 2014, even though his health was declining, he wanted to go on a family vacation to Disney World in Florida. The many memories that were created on this trip along with the years of other memories will now be cherished by those he leaves behind. He is survived by his wife, Pat Wilson of Marion, IL; four children, Valerie Long, Andrew Wilson, Angie Bell and Jo Anna Roth all of Marion, IL; granddaughter, Alyssa Long of Marion, IL; two grandsons, Brandon Long and Michael Wilson both of Marion, IL; two brothers-in-law, Stephen Hensgen of Mulkeytown, IL and Jim Hensgen and his wife, Carla of Carterville, IL, nieces, nephews, his “Fish Camp Family”, other extended family and many friends. He was preceded in death by his parents and son-in-law, Eddie Long. Arrangements for Dale W. “Squeak” Wilson were entrusted to Wilson-McReynolds Funeral Home, 900 N. Court St., Marion, IL. Visitation was on Monday, October 6, 2014, from 2:00 p.m. until 5:00 p.m. at the funeral home. During the time of visitation a “Reflection of Life” DVD Memorial Tribute featuring special people, places and events of Squeak’s life was presented to the family and friends. Following the time of visitation the memorial service was at 5:00 p.m. with Rev. Mark Mohler presiding. At the beginning of the service members of Heyde-Pillow V.F.W. Post No. 1301 and American Legion Post No. 147 both of Marion, IL and the United States Navy Funeral Honors Burial Detail presented an honorary salute walkthrough while special recorded hymns “Battle Hymn of the Republic” and “Anchors Aweigh” played. The prelude and postlude musical selections were recorded piano selections. Special recorded vocal musical selections presented during the service were “Beam Me Up” by Pink and “Go Rest High On That Mountain” by Vince Gill. After the memorial service military honors were accorded at the funeral home by members of Heyde-Pillow V.F.W. Post No. 1301, American Legion Post No. 147 both of Marion, IL and the United States Navy Funeral Honors Burial Detail. Those participating were Commander, Larry Largent; Chaplain, Dan Fruge; Officer of the Day, Pat Campbell; Bugler, Jim Grieme; National Colors, Ernie Rinella; VFW Post Colors, Jeff Hoffard; Color Guard, Jessie James and Bill Rice and Firing Squad, Don Burgrabe, Ron Ganzer, Wayne O’Connor, Fred Read, Bill Reynolds, Ron Russell and Jerry Swisher. Members of the United States Navy Funeral Honors Burial Detail participating in folding of the flag were naval officers, EO1 Don Floyd and OS1 Mark Rulo. As the flag was folded the recorded hymn “America the Beautiful” was played. Presentation of the flag to Squeak’s wife, Pat was by naval officer EO1 Don Floyd. After the service the family and friends gathered back at Squeak and Pat’s home for a meal and continued time of fellowship and support. For those who preferred, memorial contributions were made to “Hospice of Southern Illinois”. Memorial contribution envelopes were available at the funeral home or were mailed in care of Wilson-McReynolds Funeral Home, P.O. Box 370, Marion, IL, 62959. For additional information please contact the funeral home by calling 618-993-2131.

The family of Dale Wayne "Squeak" Wilson created this Life Tributes page to make it easy to share your memories.