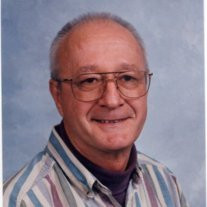 Daniel Bunting, age 73, of rural Marion, IL passed away peacefully at 8:10 a.m., on Saturday, February 23, 2013, at his home. He was born on Tuesday, October 10, 1939, the son of David and Daisy (Murphy) Bunting. Daniel attended school in Marion and was a graduate of Marion High School in 1958. He was united in marriage to Carol Jean Vanzandt on Friday, March 18, 1960, at Scottsboro Baptist Church of Marion, IL and together they have shared nearly fifty three years of marriage. Daniel’s working career began as a cement mason from 1959 until 1992. Then in 1993 he began working and traveling all over the world for the United States Department of Defense as a civilian working as their school support staff until his retirement in 2006. He was a member of Scottsboro Baptist Church and recently since his retirement was attending Our Redeemer Lutheran Church both of Marion, IL. In his spare time he enjoyed hunting, fishing, woodcarving and trap shooting. He also had the ability of telling wonderful stories both real and imagined and enjoyed telling the young school children these stories and watching their excitement. Both he and his wife, Carol had many opportunities through their work to see many parts of the world, traveling to areas not experienced by many. Around the holidays, no matter where they were at in the world, Daniel and Carol would travel back to the States to be with their family, enjoying the time together. Now those who are left behind will cherish the many memories that were created. He is survived by his wife, Carol J. Bunting of Marion, IL; two sons and one daughter-in-law, Robert Daniel Bunting of San Francisco, CA and Scott and Kim Bunting of Christopher, IL; five grandchildren, Katherine Bunting and her companion, Dwight Dillard of Phenix City, AL, David Bunting and Jack Bunting both of Christopher, IL and Kyle Hammonds and Kaylee Hammonds both of Mulkeytown, IL; great granddaughter, Kya Dillard of Phenix City, AL; brother, Robert D. Bunting of Carbondale, IL; sister-in-law and brother-in-law, Debra and Jim Burford of Marion, IL; uncle, Bill Murphy of Marion, IL; two nieces, Alysa Bunting and companion, Tim Moulton of Johnston City, IL and Michelle (Burford) Kinner and husband, Eric of Burlington, IA and nephew, Eric Bunting and wife, Jamie of Marion, IL; great niece, Rumer Bunting of Marion, IL; two great nephews, Tucker Bunting of Marion, IL and Aiden Moulton of Johnston City, IL; four cousins, Jennifer Hudgens, Tom Murphy and Brad Murphy all of Marion, IL and Gina Murphy of Winflow, ME, other extended family and many friends. He was preceded in his death by his parents. Arrangements for Daniel Bunting were entrusted to the Wilson-McReynolds Funeral Home, 900 N. Court Street, of Marion, IL. The time of visitation for family and friends was on Saturday, March 2, 2013, between the hours of 10:00 a.m. and 1:00 p.m. at the funeral home. During the time of visitation a “Reflection of Life” DVD Memorial Tribute featuring special people, places and events of Daniel’s life was presented to the family and friends. Following the time of visitation the funeral service was at 1:00 p.m. with Rev. Kevin McNeely presiding. Family memories and comments were presented by sister-in-law, Debra Burford and son, Scott Bunting and granddaughter, Katherine Bunting read a special poem. The prelude and postlude musical selections were presented by pianist, Lori Creamer. Special musical selections presented were “Amazing Grace” as a vocal selection by Iretta Stephens and accompanied by pianist, Lori Creamer and “Special” as a vocal selection by Iretta Stephens with recorded accompaniment. Interment followed in Lakeview Cemetery of Johnston City, IL with Rev. Marlin Otte presiding. Pallbearers were Scott Bunting, Eric Bunting, Jack Bunting, Robert D. Bunting, David Bunting and Kyle Hammonds. Following the committal service at the cemetery the family and friends gathered at Dan and Carol’s home for a meal and continued time of fellowship and support. For additional information please contact the funeral home by calling 618-993-2131.

Daniel Bunting, age 73, of rural Marion, IL passed away peacefully at 8:10 a.m., on Saturday, February 23, 2013, at his home. He was born on Tuesday, October 10, 1939, the son of David and Daisy (Murphy) Bunting. Daniel attended school in Marion... View Obituary & Service Information

The family of Daniel Bunting created this Life Tributes page to make it easy to share your memories.

Send flowers to the Bunting family.