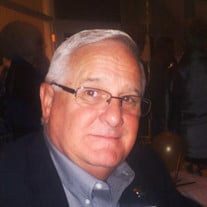 Daniel Randolph Jenkins, age 67, of Marion, IL passed away suddenly at 11:32 a.m. on Sunday, April 8, 2018, in Heartland Regional Medical Center of Marion. He was born on Thursday, July 6, 1950, in Pikeville, KY, the son of William DeRonda “Dub” Jenkins, Jr. and Evelyn Floriene (Booker) Jenkins. He attended school in Marion and was a graduate of Marion High School Class of 1968. He continued his education attending Southern Illinois University of Carbondale and received a Bachelor Degree in Journalism. He was united in marriage to Cynthia Powell on Friday, February 26, 1982, in Houston, TX, and together they shared over 24 years of marriage until her death on Monday, October 30, 2006. He later was united in marriage to Sharon Gail Baker on Friday, March 6, 2009, in the First United Methodist Church of Marion and together they have shared over 9 years of marriage. Dan worked for several businesses during his life. When he was young he started working with Kroger’s and worked for them for many years. While living in the Houston and Galveston, TX area he worked for the area’s large grocery chains until he moved to San Francisco, CA where he worked for large grocery and drug store chains. He then moved back to Marion somewhere around 2004, and began working for the Salvation Army where he became District Manager over all of their retail stores and social services of the area until his retirement in 2010. He was a member of First United Methodist Church of Marion and was a former member of the Marion Noon Rotary Club where he once served as President and a Paul Harris Fellow. In his spare time he enjoyed fishing and watching old westerns. Dan loved his family and enjoyed spending time with them and was always interested and all of their many activities. The many memories that were created will now be cherished by those he leaves behind. He is survived by his wife, Sharon G. Jenkins of Marion; four daughters and one son-in-law, Kimberly and Martin Sorich of Morgan Hill, CA, Jessica Bandfield of Roseville, CA and Grace Enrietto and Faith Enrietto both of Marion; four grandchildren, Dominic Daniel Sorich and Lucas Sorich both of Morgan Hill, CA and Alex Bandfield and Andrew Bandfield both of Roseville, CA; brother and sister-in-law, Donald W. and Joan Jenkins of Houston, TX; two nephews, Timothy R. Jenkins of Austin, TX and Andrew Jenkins and his wife Kristin of Dallas, TX; great nephew, Daniel W. Jenkins; great niece, Sarah E. Jenkins, other extended family and many friends. He was preceded in death by his parents; wife, Cynthia; and brother, William Dean Jenkins. Arrangements for Daniel R. Jenkins have been entrusted to Wilson-McReynolds Funeral Home, 900 N. Court St., Marion. The visitation was on Saturday, April 14, 2018, from 11:00 a.m. until 1:00 p.m. at the funeral home. During the visitation a “Reflection of Life” DVD Memorial Tribute was presented to the family and friends and featured special people, places, and events of Dan’s life. Following the time of visitation the funeral service was at 1:00 p.m. with Rev. Lance Leeds presiding. The prelude musical selections were Frank Sinatra songs, including “My Way,” “One for My Baby (And One More for the Road),” and “I’ll Never Smile Again. The postlude musical selections were Elvis Presley songs, including “Milky White Way,” “You’ll Never Walk Alone,” “Take My Hand, Precious Lord,” “(There’ll Be) Peace in the Valley (For Me).” Those participating in the service and presented special comments of memory were Tim and Drew Jenkins, Steve Shafer, and Dan Baker. Interment followed next to his former wife Cynthia, in Rose Hill Cemetery of Marion. Those serving as pallbearers were Sam Spiller, Steve Shafer, Dean Baker, Dan Baker, Timothy Jenkins, and Drew Jenkins. Following the graveside committal service family and friends gathered at Dan and Sharon’s home for a meal and continued time of fellowship and support. For those who preferred memorial contributions were made to either or both “Hospice of Southern Illinois” and “Veteran’s Honor Flight of Southern Illinois” mailed in care of Wilson-McReynolds Funeral Home, 900 N. Court Street, Marion, IL 62959. Memorial envelopes were available at the funeral home. For additional information call the funeral home at 618-993-2131.

Daniel Randolph Jenkins, age 67, of Marion, IL passed away suddenly at 11:32 a.m. on Sunday, April 8, 2018, in Heartland Regional Medical Center of Marion. He was born on Thursday, July 6, 1950, in Pikeville, KY, the son of William DeRonda... View Obituary & Service Information

The family of Daniel Randolph Jenkins created this Life Tributes page to make it easy to share your memories.

Send flowers to the Jenkins family.