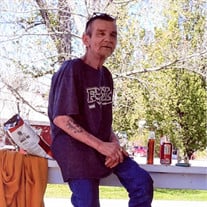 Darrell E. Knight, age 56, of Creal springs, IL, passed away peacefully with his family near, at 4:33 p.m. on Friday, February 26, 2021, at his home. He was born on Tuesday, July 7, 1964, in Mt. Vernon, IL, the son of Neil Duane and Eva Lee (Sinks) Knight. Earlier in his life, he was united in marriage to Marie Davis in 1990, in Marion, IL, and together they shared several years of marriage. Darrell’s working career for many years was with several different Carnival and Amusement Businesses. Over the years he had traveled all over the country driving the Semi Trucks, operating the rides and games of the midway. He loved this type of life and was known by many he traveled with as “Popeye.” Later in his life he was hired by the City of Creal Springs, working for the city, and was capable of doing most everything they needed done. He worked for the city for 12 years until his health forced him to retire. In his spare time he enjoyed camping, fishing, hunting, visiting with his many friends. He had a great love for animals and helping children when he saw there was a need. He enjoyed the many times his large family all gathered together for special events. The many memories created will now be cherished by those he leaves behind. He will never be forgotten. He is survived by his three sisters, Lola Wolaver and husband, Robert of Whiteash, IL, Diane Simmons and husband, Michael of Creal Springs, IL and Latisa Woodis of Herrin, IL; two brothers, Duane Knight of Marion, IL and Larry Knight and wife, Crystal of Herrin, IL; aunt, Barbara Denham and husband, Herbert of Mt. Vernon, IL; special companion, George his 14 year old Dachshund, a large host of nieces, nephews, great nieces and great nephews, other extended family and many friends. He was preceded in death by his parents; sister, Carolyn Bush; brother, Jerry Knight and niece, Robin Knight. Arrangements were entrusted to Wilson-McReynolds Funeral Home, 900 North Court Street, Marion. The visitation was on Sunday, March 7, 2021, from 11:00 a.m. to 12:00 p.m. at the funeral home. During the time of visitation a “Reflection of Life” DVD Memorial Tribute featuring special people, places and events in Darrell’s life was presented to the family and friends. Also during the time of visitation there was a large selection of recorded musical selections presented that were special to Darrell by many various artists. Following the time of visitation the funeral service was at 12:00 p.m. with Darrell’s brother, Larry Knight presenting comments of memory. Also presenting comments of memory were Katy Sullivan, Linda Wolaver, Autumn Ward and Damien Taylor. Special recorded musical selections presented during the service were “Gone Too Soon” by Simple Plan, “Give Heaven Some Hell” by Hardy, “It’s a Heartache” by Bonnie Tyler, “You Should Be Here” by Cole Swindell, “Save Me” by Jelly Roll and “Dust in the Wind” by Kansas. Interment followed in Webb Cemetery near Tunnel Hill, IL. Pallbearers were Larry Knight, Duane Knight, Chris Knight, Kendra Knight, Lilith “Star” Hubble, Robert Wolaver, Brandy Blackwell and Norman Jacobson. At the graveside a “Special Toast to Darrell” was done by those attending and a special recorded song “Turn the Page” by Bob Seger & The Silver Bullet Band was also presented. Following the committal service at the cemetery the family and friends gathered at Ray Fosse Park in Marion, for a meal and continued time of fellowship and support. For additional information, call the funeral home, at 618-993-2131.

The family of Darrell Eugene Knight created this Life Tributes page to make it easy to share your memories.

Send flowers to the Knight family.