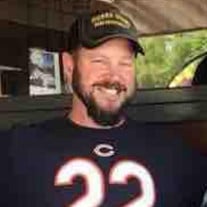 David M. Ganske, age 38, of Marion, IL, passed away at 10:22 p.m. on Sunday, July 29, 2018, south of Marion, from the results of an automobile accident. He was born on Wednesday, October 3, 1979, in Elmhurst, IL the son of Donald David and Katherine (Smith) Ganske. David’s working career was as a mechanic with Sierra Bravo Contractors of Sesser, IL and traveled working on many construction jobs. He was a member of Lake Creek Masonic Lodge No. 729 of Johnston City, IL. David was a giving person who would help anyone who had a need and loved visiting with his many friends. He is survived by three sisters and one brother-in-law, Jennifer and Bill O’Grady of Arlington Heights, IL, Michelle Jackson of Las Vegas, NV and Bonnie Ganske of Howell, MI; nieces and nephews, Kyle, Harrison, Meghan, Sean, Maeve and Austin; special young lady, Layla Hamilton of Marion, who David considered as his daughter, other extended family and many friends. He was preceded in death by his parents. Arrangements have been entrusted to Wilson-McReynolds Funeral Home, 900 North Court Street, Marion, IL. The memorial service will be at 10:00 a.m. on Saturday, August 11, 2018, at the funeral home with Rev. Lance Leeds presiding. Lake Creek Masonic Lodge will present the Masonic service during the service. For those who prefer, memorial contributions may be made to “Jennifer O’Grady” to be used for the benefit of Layla Hamilton, who he considered as his daughter. Memorial contribution envelopes will be available at the funeral home or may be mailed in care of Wilson-McReynolds Funeral Home, 900 North Court Street, Marion, IL 62959. For additional information call the funeral home at 618-993-2131.

The family of David Michael Ganske created this Life Tributes page to make it easy to share your memories.

Send flowers to the Ganske family.