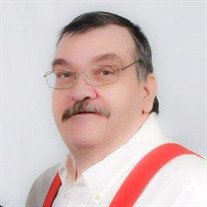 David A. Riggle, age 56, of Marion, IL passed away peacefully surrounded by his children at 2:30 p.m. on Friday, April 20, 2018, at the Heartland Regional Medical Center of Marion, IL. He was born on Tuesday, October 10, 1961, in Danville, IL the son of Arthur Irvin and Rose (Champomier) Riggle. David attended school in Westville, IL and was a graduate of Westville High School. He was united in marriage to the love of his life, JoAnne Kay Olson on Saturday, February 27, 2010, in Whiteash, IL and together they shared over 5 years of marriage until her death on Thursday, October 8, 2015. David’s working career was in trucking and with the AutoZone Company of Danville, working at their warehouse for many years until his health forced him to retire. He loved his family and enjoyed the times they shared together. The many memories that were created will now be cherished by those he leaves behind. David was a much loved man and a saying by William Penn that he had said many times was; “For death is no more than a turning of us over from time to eternity” and now we can say of David, “He has now gone home”. He is survived by two daughters and son-in-law, Anna and Tim Tindall of rural Marion near the Lake of Egypt and Kimberely Riggle-Miller of Marion; son, Dustin Riggle of Pleasantview, TN; 10 grandchildren who were the love and lights of his life, Jacob, Jeffrey, Kylie, Niccolette, Johnathan, Logan, Landon, Liviya, Kylan and Luke; three sisters, Ivy McMasters and her special friend Phil of Westville, Rose Donoho and her husband Ken of West Frankfort, IL and Sandy Graves and her husband, Dick of Aliquippa, PA; best friend, Victor Fann of Hurst, IL, many nieces and nephews; his dearest dog, Penelope, other extended family, and many friends. He was preceded in death by his parents and his wife. Arrangements for David A. Riggle were entrusted to Wilson-McReynolds Funeral Home, 900 N. Court St., Marion. The visitation was on Tuesday, April 24, 2018, from 4:00 p.m. until 7:00 p.m. at the funeral home. Following the time of visitation the memorial service was at 7:00 p.m. with David’s sister, Sandy Graves presiding. The prelude and postlude musical selections were recorded piano selections. Special recorded vocal musical selection presented during the service was “When I’m Gone” by Joey + Rory. Various family and friends presented comments of memory during an informal time of sharing during the service. Interment followed next to his wife, JoAnne, in Rose Hill Cemetery of Marion on Thursday, April 26, 2018. For those who prefered memorial contributions were made to “The Kidney Foundation” and mailed in care of Wilson-McReynolds Funeral Home, 900 N. Court Street, Marion, IL 62959. Memorial envelopes were available at the funeral home. For additional information please contact the funeral home at 618-993-2131.

David A. Riggle, age 56, of Marion, IL passed away peacefully surrounded by his children at 2:30 p.m. on Friday, April 20, 2018, at the Heartland Regional Medical Center of Marion, IL. He was born on Tuesday, October 10, 1961, in Danville,... View Obituary & Service Information

The family of David Arthur Riggle created this Life Tributes page to make it easy to share your memories.

David A. Riggle, age 56, of Marion, IL passed away peacefully...

Send flowers to the Riggle family.