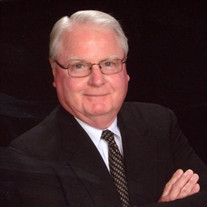 David C. Shaw, age 78, of Marion, IL, formerly of Astoria, IL, passed away peacefully at 5:21 p.m. on Tuesday, March 31, 2020, in Herrin Hospital of Herrin, IL. He was born on Monday, June 9, 1941, in Canton, IL, the son of James and Marjorie Lucille (Campbell) Shaw. Dave attended school in Lewistown, IL, and was a graduate of Lewistown High School Class of 1959. In the early 1960’s, he attended Peoria Barber School of Peoria, IL and became a licensed barber. This was something he was very proud of keeping his licensed active till the time of his death. He began his long career as a barber in the early 1960’s, working in Lewistown. In 1966, he opened his own barber shop in Astoria, called “Dave’s Barber Shop” and operated it until 1970. After the closing of the public barber shop he continued to barber out of his home barber shop cutting hair in the evenings, especially on Thursdays, until he moved 1987, to Oklahoma. Many people of the Astoria area currently remember those evening haircuts they received at the Shaw home. After the closing of his shop in 1970, he began working as a welder at the International Harvester Plant in Canton until they closed in 1981. He then began his long working career as an Insurance Agent for Country Companies, now known as Country Financial Insurance, in Canton. In 1987, he was promoted as Agency Manager and was relocated to Oklahoma City, OK working there until he was relocated in 1992, to the northwest suburbs of Chicago. Then in 1999, he was given the opportunity to relocate to Marion, in charge of the counties of Williamson, Jackson and Franklin until his retirement in 2006. Dave was united in marriage to Linda Lou Royer on Sunday, June 9, 1963, in Littleton, IL, and together they have shared nearly 57 years of marriage. He was a member of Aldersgate United Methodist Church of Marion. He was a Lifetime Master Mason of the Masonic Lodge and throughout his lifetime was a member of The Lions Club, Optimist Club, Rotary Club and was a former member of the Fulton County Board for many years. When he was younger he enjoyed camping, fishing and hunting. He also was an avid golfer once getting a hole in one, enjoyed traveling, going on cruises and having bible study. It was in 1970, at the Astoria United Methodist Church, that Dave dedicated his life to Jesus Christ. Dave was often heard quoting Ephesians 2 verses 8-9: “For it is by grace you have been saved through faith; and this is not from yourselves, it is the gift of God. Not by works, so that no one can boast”. This is a special verse he tried living his life by. He loved spending time with his family and many friends. He was always interested in all of their many activities, especially those of his grandchildren. The many memories that have been created will now be cherished by those he leaves behind. He is survived by his wife Linda L. Shaw of Marion; daughter and son-in-law, Vicki S. and Tim Phillips of Rushville, IL; son, Todd D. Shaw of Troy, IL; four grandchildren, Whitney Miller and husband, Derrek of Plymouth, IL, Mallory Henton and husband, David of Rochester, IL and Cody Shaw and Nick Shaw both of Glen Carbon, IL; three great grandchildren, Hannah Grace Henton and Rachel Elizabeth Henton both of Rochester, IL and Laura Loraine Miller of Plymouth, IL; brother and sister-in-law, Robert and Vivian Shaw of San Clemente, CA; nephew, Marcus Shaw and wife, Lisa of Redlands, CA; sister-in-law, Darlene Prather and husband, Randall of La Prairie, IL, other extended family and many friends. He was preceded in death by his parents. Arrangements were entrusted to Wilson-McReynolds Funeral Home, 900 N. Court St., Marion. DUE TO HEALTH CONCERNS RELATED TO THE COVID-19 VIRUS AND BY THE SIGNING OF EXECUTIVE ORDER BY THE ILLINOIS GOVERNOR the funeral service was private at 2:00 p.m. on Friday, April 3, 2020, at the funeral home with Pastor Lance Leeds presiding. The service was live streamed on Facebook to many of Dave’s friends who could not attend. Special recorded musical selections presented during the service were “Because He Lives” by The Gaither Vocal Band, “Amazing Grace” by Anne Murray, “Give Me Jesus” by Jeremy Camp and “Goodbye” by Kenny Rogers. Interment was at 2:00 p.m. on Monday, April 6th in Astoria Cemetery of Astoria, IL. At the graveside Dave’s daughter, Vicki Phillips read comments of memory written by Dave’s brother, Robert. Pallbearers were Tim Phillips, David Henton, Derrek Miller and Cody Shaw. For those who preferred memorial contributions were made to either/or "Aldersgate United Methodist Church Memorial Fund” and/or “Hospice of Southern Illinois”. Memorial contributions were mailed to the Wilson-McReynolds Funeral Home, 900 North Court St., Marion, IL 62959. For additional information call the funeral home at 618-993-2131.

The family of David Campbell Shaw created this Life Tributes page to make it easy to share your memories.

Send flowers to the Shaw family.