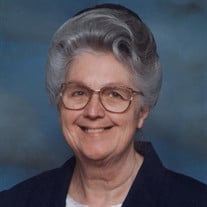 Delores J. Emery, age 77, of Marion, IL, passed away peacefully with her family by her side at 7:20 a.m. on Thursday, October 8, 2015, in Herrin Hospital of Herrin, IL. She was born on Tuesday, April 5, 1938, in Marion, IL the daughter of William Thomas “Bill” and Helen Marie (Dempsey) Garrett. Delores attended her early school years at Lamaster School in Marion and later was a graduate of Marion High School. She was united in marriage to Wayne Eugene Emery on Friday, August 17, 1956, in Marion, IL, and together they shared over 58 years of marriage until his death on April 17, 2015. Her working career outside of the home was as a school bus driver in Marion, driving “Bus #5”, for about 18 years until her eyesight started to fail and she had to retire. Being the wife of a minister, she moved several times during her lifetime and was always active in the church her husband was affiliated with. She devoted herself to her family, seeing to their needs and managing the home. She was involved in her children’s activities and was a great example to them and all of those she came into contact with. She was a member of the Lamaster Pentecostal Church of Marion, IL and the Modern Woodman of America. Delores has always been an avid reader, especially of novels. Even as her eyesight failed she continued to read daily with the special glasses she had. She loved to talk on the telephone daily with all her family and many friends keeping up with all of their activities. She enjoyed attending church and family gatherings and she especially loved spending time with her grandchildren and great grandchildren. The many memories that have been created will now be cherished by those she leaves behind. She is survived by son, Steve Emery of Herrin, IL; daughter, Paula Emery of Johnston City, IL; four grandchildren, Keri Johnson and her husband Greg of Christopher, IL, Christina Emery of Orient, IL, Darren Small of Johnston City, IL and Ryan Smelcer and his wife Ashley of Carbondale, IL; four great grandchildren, Trevor and Reece Johnson and Emily and Matthew Smelcer; brother and sister-in-law, Tom and Sally Garrett of Marion, IL; three sisters-in-law, Myra Logsdon and husband Jim and Jodi Webb all of Marion and Sharon Garrett of Herrin, IL; four brothers-in-law, William “Willie” Emery and wife JoAnn, Marvin Emery and Jim Little all of Marion and Gary Emery of Salisbury, NC, several nieces, nephews, other extended family and many friends. She was preceded in death by her parents, husband, brother, Jimmy Garrett; sister, Janet Little and niece, Dixie Garrett. Arrangements for Delores J. Emery were entrusted to the Wilson-McReynolds Funeral Home, 900 N. Court Street, of Marion, IL. The visitation was from 4:00 p.m. until 7:00 p.m. on Sunday, October 11th, at the funeral home. During the time of visitation a “Reflection of Life” DVD Memorial Tribute featuring special people, places and events of Delores’ life was presented to the family and friends. The funeral service was at 1:00 p.m. on Monday, October 12, 2015, at Wilson-McReynolds Funeral Home, with Brother Chris Clendenin, Brother Cecil Clendenin and Brother Dennis Myers presiding. A special poem “I Love You Mama” was presented by Delores’ granddaughter, Keri Johnson. The prelude and postlude musical selections were presented by pianist, Sister Linda Myers. Special musical selection presented as a congregational hymn was “Heaven’s Jubilee” lead by Stacy Hosmon and Brother Dennis Myers accompanied by pianist, Sister Linda Myers. Special vocal selection presented was “We Are Standing on Holy Ground” by Sister Linda Myers who accompanied herself on the piano. Special recorded musical selection presented was “Go Rest High on That Mountain” by Vince Gill. Interment followed next to her husband in Herrin City Cemetery located in Herrin, IL. Pallbearers were Andy Garrett, Greg Johnson, Trevor Johnson, Ryan Helton, Darren Small, Ryan Smelcer, Timothy Schlag and Jim Little. At the graveside Delores’ niece, Stacie Little presented the musical selection “Amazing Grace”. Following the committal service at the cemetery the family and friends gathered at the Golden Corral in Carbondale, IL for a meal and continued time of fellowship and support. For additional information please call the funeral home at 618-993-2131.

The family of Delores Jean Emery created this Life Tributes page to make it easy to share your memories.