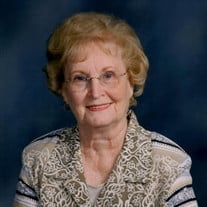 Delores A. Rix, age 84, of Marion, IL passed at 5:43 p.m. on Sunday, March 6, 2016, in Heartland Regional Medical Center of Marion. She was born at home on Monday, August 31, 1931, in Granite City, IL, the daughter of Ira and Jessie (Lewis) Jennings. Delores was united in marriage to Howard Earl Rix on Saturday, June 19, 1948, in Marion and together they enjoyed over 59 years of marriage until his death on Wednesday, July 25, 2007. She spent the majority of her lifetime seeing to the needs of her family and managing her home and also was actively involved with her husband in the family business, S.H. Rix & Sons Heating & Air Conditioning in Marion, until they closed the business and retired in the early 1990’s. She worked part time after her children were older at several area businesses; including Hardees, Wal-Mart and the Dollar General Store and did baby-sitting for many young families. Delores was a long time member of the Third Baptist Church of Marion where she was actively involved in many activities of the church, especially when her children were younger, until her health declined. In her spare time she enjoyed doing ceramics, crocheting, was an avid reader and in her earlier years bowling. She enjoyed getting together with her family and was always interested in all of their many activities, especially those of her grandchildren and great grandchildren. The many memories that have been created will now be cherished by those she leaves behind. She is survived by two sons and daughters-in-law, Steve and Carol Rix and David and Drusilla Rix all of Marion; daughter and son-in-law, Susan and Tim Atkisson of Marion; seven grandchildren, Jimmy Rix and his wife Melissa, Amy Wilson and her husband Andrew, Kyle Rix, Ryan Rix and his wife Stacey, Tyler Atkisson and Brendan Atkisson all of Marion and Jocelyn A. LaFlamme and her husband Aaron of Herrin, IL eight great grandchildren, Alexis Edwards, Adelynn Wilson, Maddi Rix, Nolan Rix, Kyson Rix, Loralie Rix and Cora Rix all of Marion and William Aaron LaFlamme of Herrin; two sisters, Golda Bailey of Charlotte, NC and Virginia Ferguson and her husband Bob of Las Vegas, NV; three sisters-in-law, Anna Housden of Vidor, TX, Irene Rix of Marion and Irene Taylor of Lebanon, IL, a host of nieces and nephews, other extended family and many friends. She was preceded in death by her parents, husband; four sisters, Adeline Pointer, Bea Thompson, Marie Squires and Iva Brownstein and two brothers, Fred Taylor and Bill Hansford. Arrangements for Delores A. Rix were entrusted to Wilson-McReynolds Funeral Home, 900 N. Court St., Marion, IL. The visitation was from 5:00 p.m. until 8:00 p.m. on Tuesday, March 8th at the funeral home. During the time of visitation a “Reflection of Life” DVD Memorial Tribute featuring special people, places and events in Deloris’ life was presented to the family and friends. The funeral service was at 11:00 a.m. on Wednesday, March 9, 2016, at Wilson-McReynolds Funeral Home with Dr. Scott Kallem presiding. Comments of memory were presented by Delores’ friend, Bob Nolen. The prelude was a medley of piano selections which concluded with “Danny Boy” presented by pianist, Lori Creamer. Special vocal musical selections presented were “Always”, “Because He Lives” & “Amazing Grace” all presented by Lori Creamer who accompanied herself on the piano. The postlude musical selection was “Sweet Hour of Prayer” presented by pianist, Lori Creamer. Interment followed next to her husband in Maplewood Cemetery of Marion, IL. Pallbearers were Aaron LaFlamme, Tyler Atkisson, Brendan Atkisson, Amy Wilson, Jimmy Rix, Ryan Rix and Kyle Rix. Following the committal service at the cemetery the family and friends gathered at Third Baptist Church in Marion, for a meal and continued time of fellowship and support. For those who preferred, memorial contributions were made to either “Third Baptist Church" or "Hospice of Southern Illinois", and mailed in care of Wilson-McReynolds Funeral Home, P.O. Box 370, Marion, IL 62959. Memorial envelopes were available at the funeral home. For additional information please contact the funeral home by calling 618-993-2131.

The family of Delores Ann Rix created this Life Tributes page to make it easy to share your memories.

Send flowers to the Rix family.